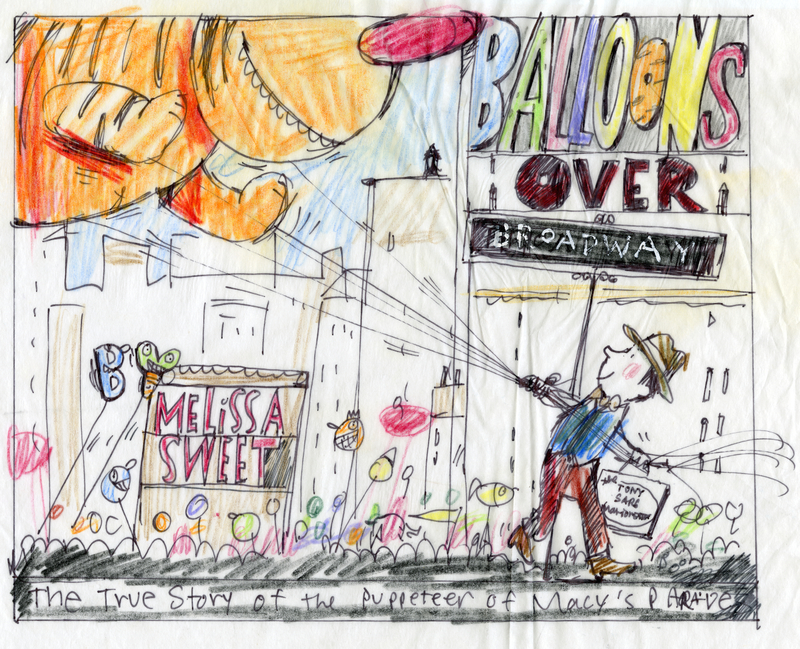 This interview takes place between the author and illustrator of Balloons Over Broadway, Melissa Sweet, and the designer of this exhibit, Emily Midkiff. This interview took place on April 4th, 2015.

Emily Midkiff: I've been reading some of the blogs where you described your process of making picture books and I’m curious if your process was different at all for Balloons Over Broadway. How was the process similar or different from your other books?

Melissa Sweet: One difference was that I was writing this book. With a typical fiction picture book, there may not be as much research. With Tony Sarg, there wasn't very much written about him and I had to piece together his story. But in piecing it together and doing the research, talking to people, seeing photographs, that informed the art. When I work on another author's manuscript, it takes some time to play catch-up, to understand what research they did and what research I need to do to bring that story to life. When I’m the author and illustrator, that is happening simultaneously.

Every book is different. Part of my process is to look at what materials and what kind of art reflects the subject I'm working on. For instance, William Carlos Williams, Peter Roget and John James Audubon are very different people. The materials I use, the way I collage or paint comes down to: how am I going to render this person's life?

EM: So Balloons Over Broadway is in many ways seen as a science or an engineering book about solving problems. So how much did your process in creating the book reflect what you know of the science and engineering processes?

Dummy of the Chicken Contraption Page (Click to View)

MS: It's interesting because I came to the book as a design problem. When I first heard about Tony Sarg, I knew that he made marionettes and he invented the gigantic Macy’s parade balloons (no one had invented helium balloons before). There was a relationship between these two very different kinds of “puppets”. They both were manipulated with strings or ropes by puppeteers and human handlers. I was searching for the moment when Sarg decided he needed helium to get the balloons higher and up off the street. Because Sarg was choreographing all the small and large parts of the parade, he wanted the balloons higher up to articulate more, and to move through the street as part of a larger parade. I also learned the story where, as a young boy he rigged up feeding his chickens using pulleys and rope from his bedroom window. It takes keen observation to figure that out, especially at six years old! That story said a lot about his mechanical mind.

I didn’t set out to have this story be about science and engineering, but it is because of the nature of using helium, the construction of the balloons, the engineering of the ropes and of puppets. Every detail in a book is a design consideration and it’s the same considerations in making a puppet– how the strings attach to a puppet has everything to do with how it moves. Everything Sarg did was about movement and about beautiful design.

EM: How much do you see making a picture book as being like an engineering project? 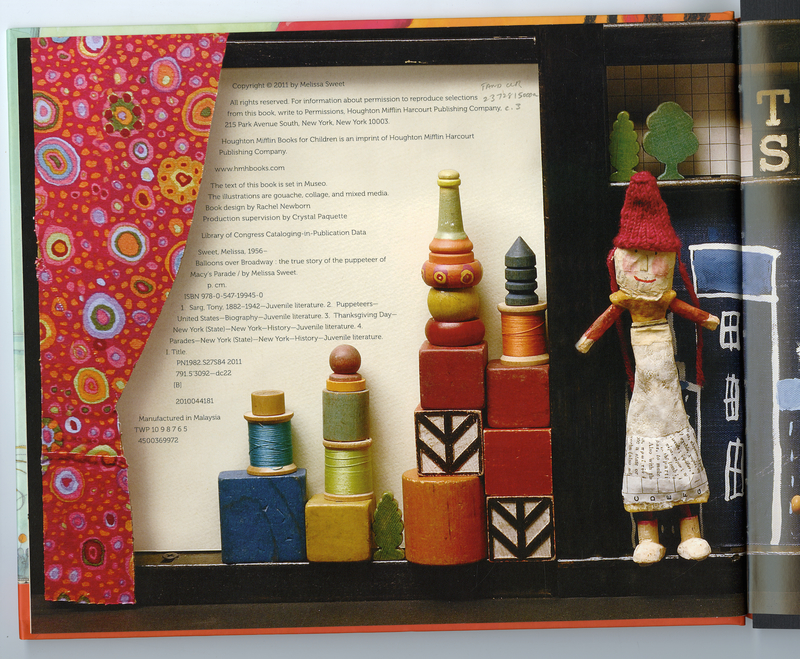 MS: My books have become more about engineering since I began including three-dimensional collage. First, after deciding which objects to use, there has to be a form for the object to sit on or against. How will it be attached? What is the relationship to the other objects or the painting in that piece? When I make a piece of art, it's not just an assemblage to be photographed, the art has its own structure. If it's hanging on a wall, it should stay intact even if it’s turned upside down. It's kind of like a Cornell box; a piece of art unto itself. All that takes engineering. So with Balloons Over Broadway, the engineering is not just about wheels and pulleys but about crafting objects. My picture books are crafted page by page, spread by spread. In illustrating biographies, objects can represent a person's life, or the accouterments of a person’s life, and give the reader a feeling of what it might have been like to walk in their shoes.

EM: So speaking of biographies, Balloons Over Broadway won the Sibert Medal in the Orbis Pictus award for being excellent nonfiction. Is anything different about your process when you're making nonfiction picture books like that?

MS: Since you're mentioning science, I was honored that Balloons Over Broadway also won a STEM Award (Science, Technology, Engineering, and Math). Even though I had done a little bit of three-dimensional art in other biographies, Balloons Over Broadway was a turning point. I became more comfortable using three-dimensional collage and understanding how I was going to go from the art to a printed book

The other difference is that biographies take more research, with a focus on primary and secondary sources. In researching Tony Sarg, I went to the Nantucket Historical Society to see his toys, puppets, housewares for Macy's and fabric he designed. I came away thinking I had to render this book three–dimensionally because his life was about making things. To draw them didn't feel rich enough and didn't add enough dimension.

EM: So after you do all this research and then you bring together your illustrations with the words, in what ways are you or aren't you concerned with that elusive idea of “truth” in telling a biographical story? 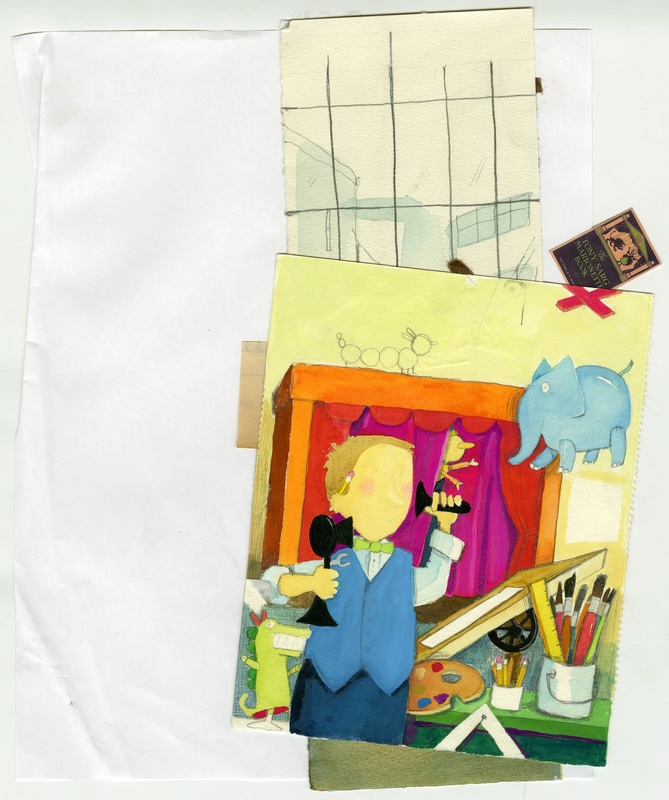 MS: When I was growing up, an illustrated biography meant two photographs and maybe some black-and-white line drawings. It was really more about the words. Telling a story with illustration (and even photographs) by nature is an artistic interpretation.

What I set out to do is keep the book true and focus on the moments that matter to the story and the overall feel of the setting, the person, the era, etc. all in about 48 pages. The words and images are based on thorough research, conversations, archival material and my imagination. For instance, I didn’t have a reference for Tony’s studio, but I knew he had a drafting table, paints, a dog, a marionette book. All that imagery showed up in in my painting of his studio. It’s the essence of his studio. In order to keep the book true to the subject, my preference is not to use invented language. Right now I’m working on a biography about E.B. White and every word anyone said in the book is sourced in the back matter.

EM: Switching gears a little bit, there’s a section in the exhibit about trial and error and one of the things I focused on was early sketches for a page about humor that didn't make it into the final book. Could you explain your thought process around that page? 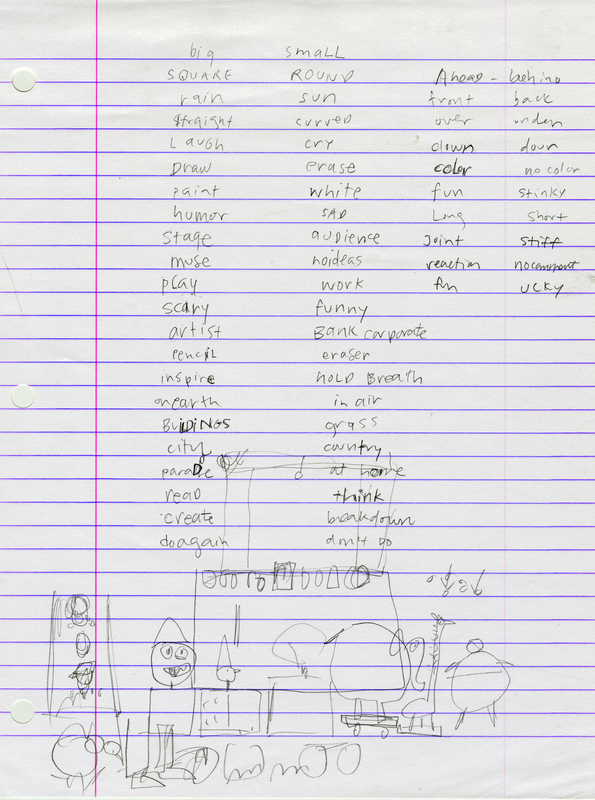 MS: Right! I have to think back. When I'm working on a book like this, sometimes I make a list of words that represent this person. Maybe it's a short list, maybe it's a long list, and “humor” and “movement” were on that list. I wanted so badly to convey that people found him humorous. He waslighthearted, whimsical and a little mischievous. But in the end, I let the art say that. I think with that sketch you’re referring to, it was a little more telling the reader Sarg was humorous rather than showing he was humorous. That was discarded for sure. Every day there are 50 sketches that don't have anything to do with anything. They never make it. You saw the volume of preliminary work I did for this book, so you have a sense of it. There’s an incredible amount of trial and error before you get to the final piece.

EM: So if we were to look for traces of how that humor became shown in the book, where would you say they are? 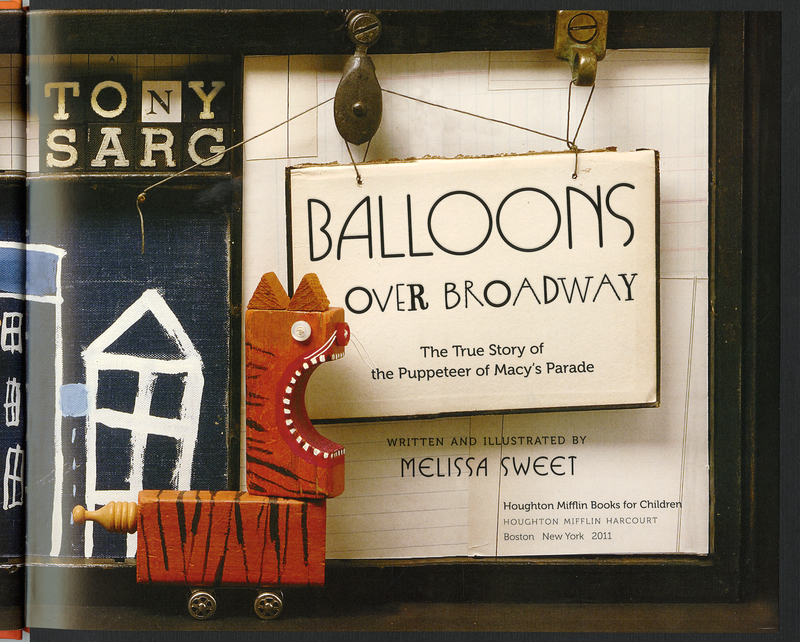 MS: Tony Sarg used big wide toothy grins with a kind of googly eyes when he drew animals. That shows up right away right on the cover. All the balloons have that great big grin that you can see in photographs of the early parades. On the title page, when I was fooling around making toys and puppets, I had some antique children’s blocks. I was thinking that the tiger is one of the most iconic of Tony's balloons. I wondered, going back to Tony’s childhood, what kind of toys did he play with? What if he had a tiger that he loved? So I began by limiting my materials to just a few things: papier-mâché, children's blocks– the things you see in the collage, and made something that represents a tiger out of the blocks. As I held the two blocks together, (and you can imagine that unpainted they didn’t look like much), I thought it was hilarious –it looked like a tiger's mouth making a huge roar! That was the sense of play and sense of humor I hoped for. That tiger does the job of saying: “we’re not taking things too seriously here”. On the page with Sarg’s quote: “Every little movement has a meaning of its own” there's a picture of four marionettes. One has a wooden spoon in his hand and he's about to bonk the puppet in front of him. That's Tony Sarg all over. It’s just nutty, but it’s typical of Sarg’s art to have a little bit of an edge. That sense of fun runs through the book. There’s some serious moments in the book, there has to be, but I think that with the color and the way it's rendered, you do get a big sense of Tony’s humor.

EM: Finally, what else do you think people should know about your process as they browse your materials on exhibit?

MS: Especially in these biographies, I feel completely devoted to representing these people in the most authentic way I can find. It doesn't happen quickly, and often it comes with taking an artistic risk. I would add that every detail in any picture book– from the moment you pick it up, the trim size, the endpapers, the font, the content of the art– is a decision. There are no random choices, but there's serendipity with collage, which is why I love it. Paper gets pushed around all day until I get surprised by something. In the end, after all the decisions have been made, the book is designed to be a true representation, to share the essence of someone and to inspire young readers.