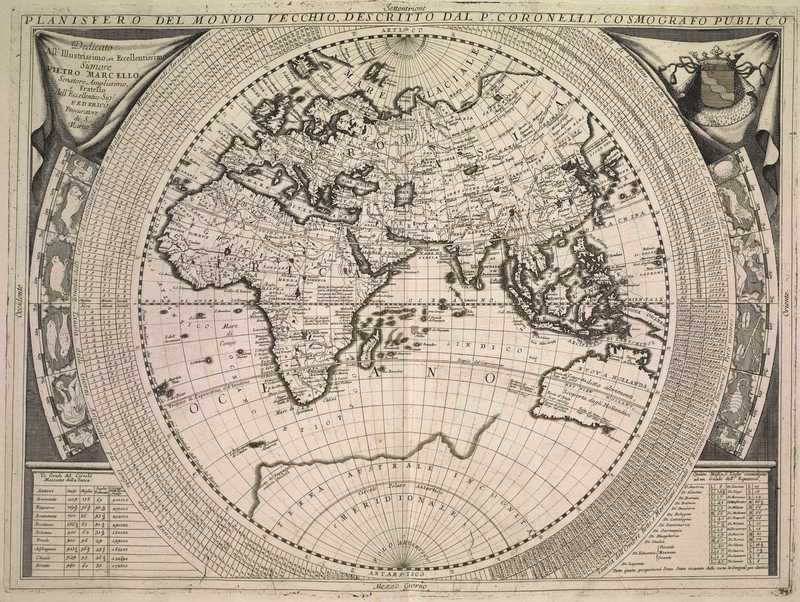 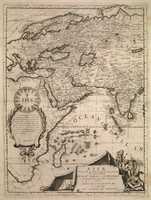 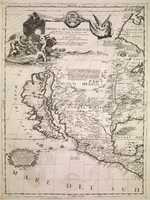 Coronelli (1650-1718) was a Venetian cartographer known for his fine atlases and globes.  His work reflected broad geographic knowledge in the late 17th century.  In 1681, he was invited to Paris to create a set of globes for King Louis XIV (1638-1715) of France, where he had access to the most current documentation at the French Academy of Sciences.  His renown as a geographer and mapmaker grew, sending him across Europe to undertake cartographic projects.  After returning to Venice permanently in 1705, he was appointed cosmographer to the Republic of Venice, where he founded the first geographical society, Accademia Cosmografica degli Argonauti.

Atlante Veneto, Coronelli’s thirteen-volume cartographic series, published in Venice between 1690 and 1698, was intended as a continuation of Johannes Blaeu’s Atlas Maior.  The Bell Library holds the first volume in this series, which contains 143 double maps, with an introduction to geography, and engravings of globes, wind roses, and cosmographic systems through the ages, from Ptolemy to Descartes.  Atlante Veneto provides a wealth of information about cartographers and geographers, with astronomical, terrestrial and sea charts, plates of ships, and portraits of historical figures.

In a recent article, Adam Mosley argues that the Atlante Veneto, with its astronomical images of world systems and celestial spheres, should be considered a work of cosmography, the Renaissance subject that encompassed both geography and astronomy, more than an atlas.  Coronelli himself, citing Aristotle, defined cosmography as an attempt to represent the entire world, which is “nothing other than a union of heaven and Earth.” (Mosley.  “Vincenzo Maria Coronelli’s Atlante Veneto and the Diagrammatic Tradition of Cosmography.”  Journal for the History of Astronomy, 42: 2011.)