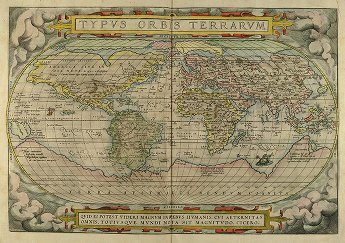 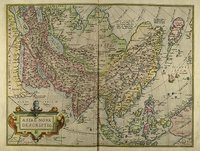 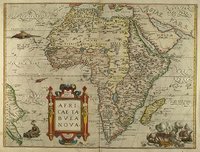 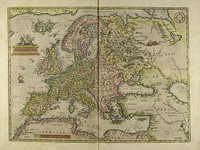 Abraham Ortelius (1527-1598), a Flemish cartographer and geographer, is recognized as the creator of the first modern atlas, Theatrum Orbis Terrarum, or Theater of the World.  Its publication marked an epoch in cartographic history, representing the first uniformly-sized collection of maps of the countries of the world based on contemporary knowledge since the days of Ptolemy.

Published in Antwerp, which soon took over from Italy as the center of cartographic publishing, the Bell copy seen here is the second issue of the first edition of the Theatrum; it contains 38 leaves, 53 hand-colored maps, and Latin text.

The Theatrum achieved immediate popularity, with four editions printed in 1570, and 42 folio editions printed between 1570 and 1612.  The maps were also reduced and published in smaller atlases, which were less expensive and easier to handle.  These varying editions were published in all the major European languages with the maps updated from time to time.

The Theatrum's maps bear the names of the most celebrated cartographers of the day.  The maps issued by Ortelius himself are distinguished by intricate cartouches enclosing the titles within interlacing scrollwork with medallions, ships, and other decorative touches.