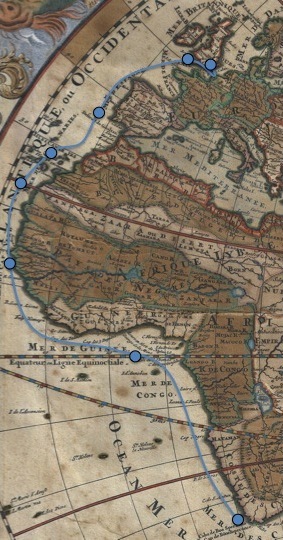 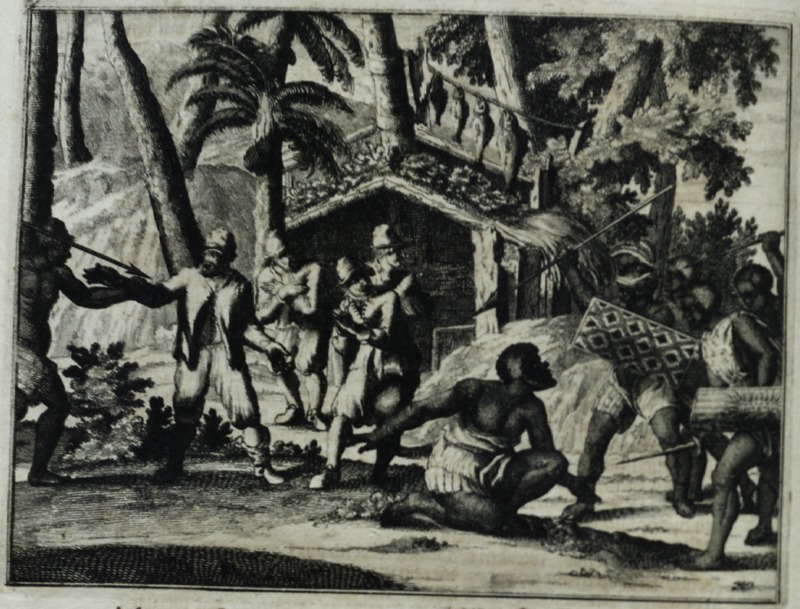 Conflict between Europeans and Africans in the interior of Africa. From Wouter Schouten's 1676 book Ost-Indische Reyse.

The early 17th century was a time when people from Europe and sub-Saharan Africa were relatively uninformed about each other's respective cultures. Although Terry likely did not set foot on African soil except for landing occasionally at ports, he recorded what little he knew about the interior of Africa: its environment, its people, and their culture. On June 12th, off the coast of the Cape of Good Hope, in a place called the Bay of Souldania, he summarized his knowledge of the region:

This bay of Souldania lieth in 34 degrees and a half of fourth latitude; in a sweet climate, full of fragrant herbs, (which the soil produceth of itself) pleasing to the sense, where our ships companies, when they have often-times there arrived with very weak and feeble bodies, usually by that sea disease, the scurvy, in which disease (I shall observe by the way) if any that have it be not too much overgone with it, as soon as he comes to enjoy the fresh air on the shore, the fresh water, and fresh food, he will presently recover; but if this disease have over much prevailed on him, immediately after he sets his foot on shore he usually dies.

This remotest part of Africa is very mountainous, over-run with wild beasts, as lions, tigers, wolves, and many other beasts of prey, which in the silent night discover themselves by their noise and roaring; to the teeth and jaws of which cruel beasts, the natives here expose their old people, if death prevent it not, when once they grow very old and troublesome, laying them forth in some open place, in the dark night… For their speech it seemed to us inarticulate noise, rather than language, like the clucking of hens, or gabling of turkeys; and thus making a very strange confused noise, when they walk here or there… Their habits are their sheep skins undrest, thronged together, which cover their bodies to the middle, with a little flap of the same skin tied before them, being naked downward; and when ‘tis cold keep the woolly, when hotter weather, the fleshy side of those skins next to the bodies.

In the 16th and 17th centuries, many European countries funded explorers and expanded their empires to other areas of the world such as Africa, Asia, and the Americas. Often, these expeditions would result in conflicts with native populations, sometimes ending in conquest and exploitation. The process through which one country acquired full or partial political control over a country is called "colonialism." The 17th century, part of what is often called the "European colonial period," saw many European countries establishing colonies throughout the world, using indigenous peoples and their resources to their own advantage. Examples of colonialism include the British in India, the Spanish in Peru, and the Dutch in South Africa.

← 6. Reflections on the Wildlife of the Tropics
8. Passing the Cape of Good Hope →
7. Description of Africa's Interior