8. Passing the Cape of Good Hope 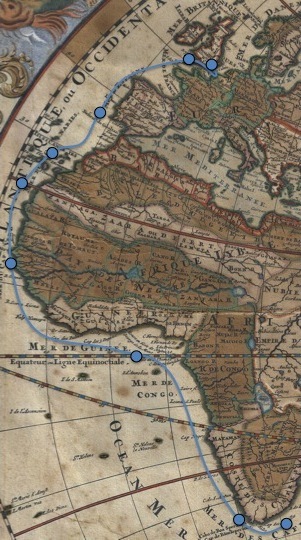 On June 29th, Terry and the Charles passed the Cape of Good Hope, which is what Europeans called the southern tip of Africa. According to Terry, it was a perilous area where ships were often swallowed by the sea:

Off this Cape there setteth continually a most violent current westward; whence it comes to pass, that when a strong contrary wind meets it (as often-times it doth) their impetuous opposition makes the sea so to rage, as that some ships have been swallowed, but many more very much endangered, amongst these huge mountains of water, and very few ships pass that way without a storm.

Terry was not the first sailor to notice the unusually strong winds and currents around the Cape of Good Hope. The first European to reach it, Bartolomeu Dias, called it the "Cape of Storms." We know now that the region's frequent storms are caused by its position between the Atlantic and Indian ocean currents. Even today, the South African weather services provides warnings about impending storms or unfavorable sailing conditions two to three days in advance.

← 7. Description of Africa's Interior
9. Alongside Madagascar →
8. Passing the Cape of Good Hope