Soon after its earliest beginnings in Germany, printers brought the art and practice of printing across the Alps to Italy.  Venice was an inevitable center for this new craft due to its geographical position, its intellectual liveliness, and the availability of supplies.  In the second half of the 14th century, a major center of papermaking was located around Lake Garda, at that time part of the Venetian Republic.  Venice was an exceptional location for the distribution of goods due to the cheapness of sea transportation.

At its height, there were more than 200 printing establishments located in Venice. At least two million books were printed there from 1470 to 1500.  The shops of printers and booksellers came to be clustered around and between the Rialto and San Marco.

Erhard Ratdolt (1442–1528) studied printing techniques in Nuremburg, Germany, and in 1476 began printing in Venice.  He was superior in printing that included woodcut illustrations, borders, initials and diagrams as well as multicolored printing.  In 1486, he returned to Augsburg, Germany.  He is given credit for introducing illustrated books in Venice and was the first to print several colored inks in the same volume.

Aldus Manutius (1450–1515) For three generations, until 1598, his family maintained its printing and publishing business,  producing over 600 works.  His printer’s device of the  dolphin & anchor is well known:  the dolphin signified speed in execution and the anchor, firmness in deliberation.  The Aldine press was the first to print in the smaller octavo size and to use italic print.  The new size was easy to hold in hand and carry in the pocket and was welcomed by the public.  These developments would lead the way to lower costs of production and scholarship began to lose its exclusive and aristocratic character.

Manutius received the first recorded copyright by the Venetian government  for his publication of Greek volumes. 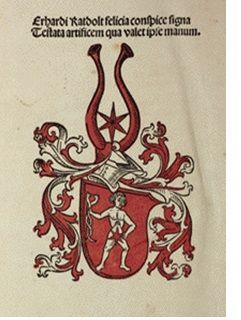 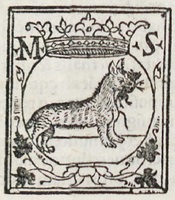 The printer’s mark of the Sessa family,  depicting a cat with a mouse in its mouth.  The Sessa’s were an important family of printers active in Venice between 1505 and 1597. 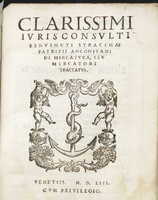 Dolphin and Anchor printer’s device of the Aldine Press