Gateway to the Holy Land 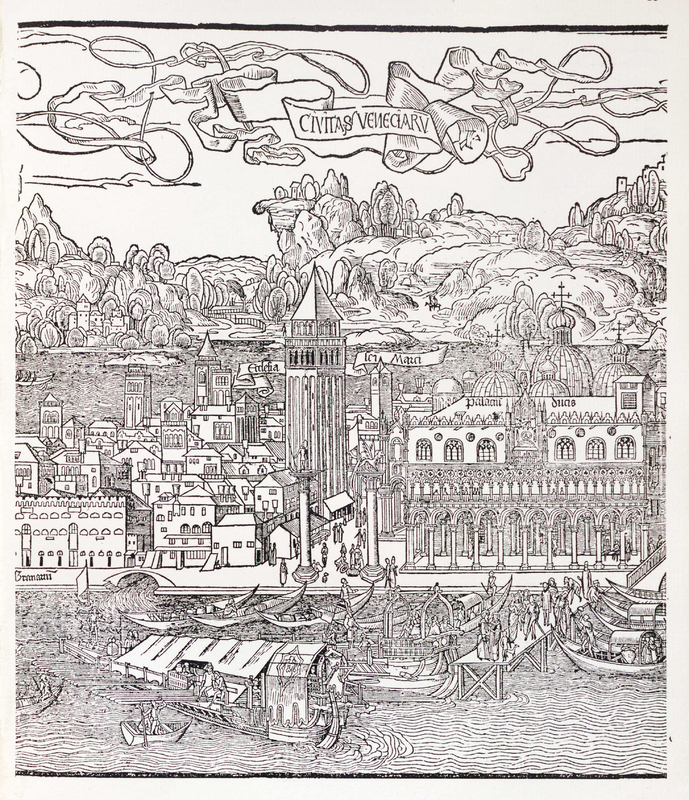 "In the seven and twenty days that passed from Venice under sail out of the haven at the sun going down, certain pilgrims..." (Informacon for Pylgrymes)

Venice long served as a port of embarkation for those on their way to Jerusalem.  The Venetian State had well organized their monopoly on pilgrim traffic to Jerusalem, in part, the State appointed officials called Cattaveri and under them a number of “piazza guides.” These guides were stationed on the Rialto and the Piazza of St. Mark.  They were to interpret for the pilgrims, help them obtain the correct exchange for their currency, to assist them in purchasing supplies for their journey, introduce them to captains of the pilgrim galleys & to an extent, advise them in the agreements they made.

The pilgrims’ most serious business in Venice was shopping for their journey.  Markets for most of the supplies needed were located close by St. Mark’s.  Pilgrims were advised by previous travelers to purchase a feather bed & bedding, pillow slips & two pair of sheets from a specific man near St. Mark’s, to whom you could resell the items even if  “broken and worn” after your journey, for half of what you paid.  Bedding, wine, a frying pan, dishes, wooden saucers, & various foodstuffs - the list of suggested supplies went on.  Pilgrims were also advised by some to purchase millet seed in Venice with which to feed the six or so hens he should also bring on board.  While making arrangements & passing the time until the galleys were ready to leave, the pilgrims were awed by Venetian pageantry, toured churches containing the relics of saints, visited the Arsenal, & the glass works at Murano.

Bernard Breydenbach’s Peregrinatio in Terram Sanctam, published in 1486, is regarded by some as the first illustrated travel book; it served as a preparatory guide for pilgrimages to the Holy Land.  It includes the first detailed and accurate printed depictions of some of the most important European and Middle Eastern cities, such as Venice and Jerusalem.  The book was illustrated with engravings by Erhard Reuwich of Utrecht.

This image inspired the theme for the Bell Library's 2012 Gallery Exhibit.