The British victory in the French and Indian War put into British hands all of the territory between the Appalachian Mountains and the Mississippi River. After the War, Anglo-American colonists began to pour over the Appalachians in search of land. For a brief generation, until the American Revolution, the British enjoyed free navigation of the Mississippi River from its source to the Gulf of Mexico.

During this period, the British colonial authorities showed little interest in exploring the new lands. Captain Jonathan Carver, a native of New England, took it upon himself to act as an unofficial government surveyor. Fashioning his expedition as a search for a water route to the Pacific Ocean, Carver traveled the northern reaches of the Mississippi in 1766. He published numerous editions of the chronicle of his journey. 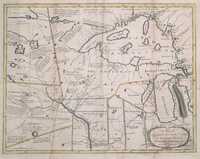 When the American Revolution began in 1774, the ongoing tensions between settlers and Indians became a part of the conflict. Most of the Indians saw the British military as the lesser of two evils in their struggle against settlers’ encroachments upon their land. But the ultimate effect of British frontier policy was to unite the Anglo-American settlers in favor of independence against Great Britain.

← The French
The United States →
The British