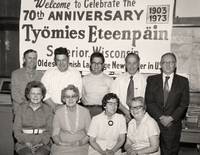 Movements for the working people found support among Finnish Americans in Minnesota. Worker’s clubs and political movements were seen to provide improvements for economic and other changes, and be agents for change. These Socialist, Communist, and Syndicalist movements were once strong among Finns in America and are thus a collecting strength of the Immigration History Research Center Archives.

For example, the Työmies Society, based for most of its existence in the Lake Superior region, aimed throughout the 20th century to promote the ideas of the international working class (advocating socialism, cooperativism, and labor unions), and to educate Finnish immigrants. Largely accomplished through publications, the Society also became a political, social, and cultural center in Finnish American working class culture. 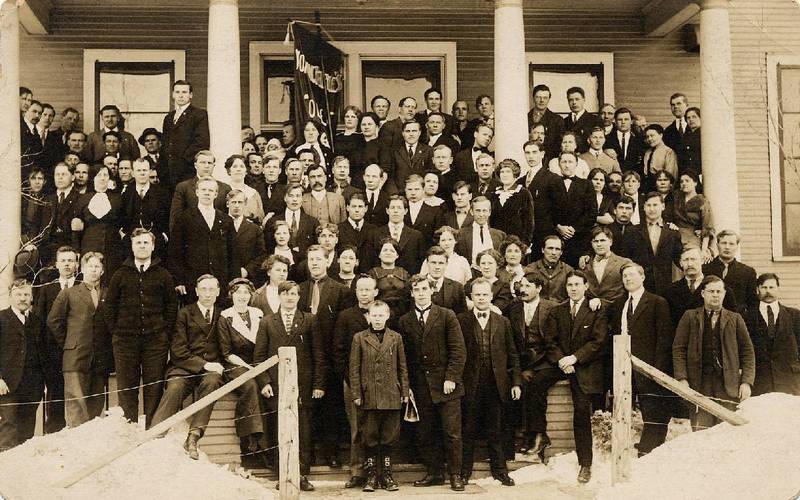 Students standing on the front steps of the Work People's College, Duluth, undated.

Some Finnish Americans, including the members of the Työmies Society, endured two broad anti-Communist movements: the First World War & 1920s era anti-Communist, anti-foreigner sentiment; and that of McCarthyism and the McCarran-Walter Act. This act of 1952 upheld the national origins quota system established by the Immigration Act of 1924 and tolerated negative focus on political radicals. Two well-known figures in the community, Työmies editors Knut Heikkinen and William Lahtinen, fought deportation. Many less famous were affected as well. Taisto Elo, a lumberjack and native and citizen of Finland, was 11 years old when he entered the United States in 1921, and paid dues to the Communist Party of Minnesota between 1936-1937. Elo was deported by the Immigration and Naturalization Board in 1953.

The Work People’s College in Duluth served the educational needs of Finnish American socialists and later, members of the Industrial Workers of the World. It closed in 1952.

An appeal for bail assistance for Taisto Ilo, held for deportation, 1952.