“World War II industrial incentive posters traditionally have been interpreted as visualizations of wartime cooperation between labor and business.  But when placed in their historical context, these posters reveal tensions between workers and management that were, like the posters themselves, ever present” 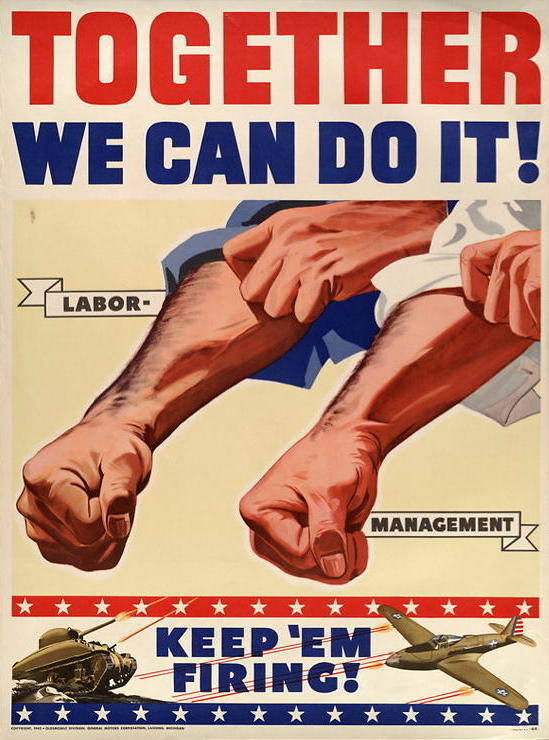 Together We Can Do It “Keep Em’ Firing,” General Motors Corporation. Oldsmobile Division, 1942

Wartime posters utilized graphics arts and advertising to persuade Americans that the home front and the factories were also an important aspect of the war effort.  There was a great deal of thought and design put into the war posters.  In January 1942, the War Advertising Council was created and consisted of staff from national advertisers and Madison Avenue advertising agencies.  The U.S. Office of War Information (OWI) was created in June 1942.  They reviewed, approved and distributed war posters.  They strived to plaster posters everywhere, urging volunteers to treat posters “as real war ammunition” and “never let a poster lie idle.”  The U.S. Office for Emergency Management’s War Production Board (WPB) created imagery for factories encouraging production.  The WPB contracted designers and commercial illustrators to create posters.  They urged factory managers to order plenty of posters and cautioned them that “posters put up in a ration of less than one for each 100 workmen on the shift are usually too thinly spread to be wholly effective.”  The OWI developed six propaganda themes for the posters.  One was “The Need to Work” which depicted the importance of Americans working in order to win the war.  The posters left out the realities of the tensions between management and labor.  From 1933-1938 there had been more than 10,000 labor strikes.  Workers and management had a history of antagonism towards each other, but the wartime emergency demanded cooperation between the two.  Industrial-incentive posters were plastered all over the factory floor.  The essence of work shifted from working for big business to doing your patriotic duty for your country.  Management hoped these posters would create a sense of unity and urgency.  However, cooperation was temporary and fleeting.  When the war ended, the tensions and struggles between labor and management resumed.