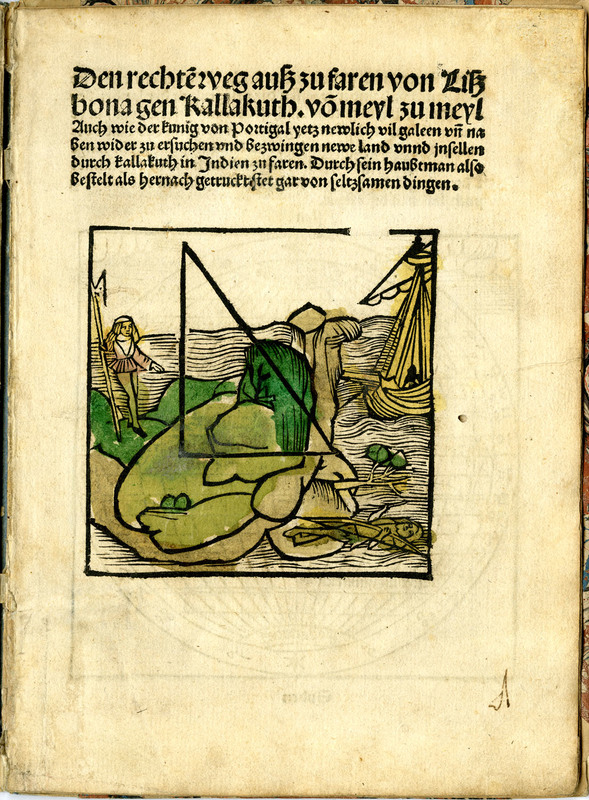 The invitation to prepare an English rendering of the news¬letter that is reproduced herewith in facsimile presented at once a challenge and a number of perplexing problems, for it would be difficult to find a printed work which supplies less information about itself. The title page gives no information as to place or date of publication, nor does it identify the author or printer. The woodcut on the title page invites interest and conjecture, but receives no positive explanation in the text. Likewise, the text itself alludes to several fleets and their captains without naming any of them specifically. Only the woodcut map on the verso of the title page is adequately described.

In short, internal evidence has been the source of most of our knowledge of this interesting leaflet, and it is hoped that the information brought to light in this first English translation of it will invite further interest in the German newsletters of the early sixteenth century and their relation to the participation of German merchants in the early spice trade to India.

From its appearance it might be presumed that this newsletter was printed in great haste, as are modern news media. This, together with the fact that there was no uniform standard of spelling and punctuation in the German language of the early sixteenth century, creates in the text an absence of uniformity which is troublesome to a translator, and which would be amusing were it not so disconcerting. The same word may appear in different spellings within a few lines, for example: meyl, meil; helt, heldt; fart, vart; unnd, und; kainn, kain; wyder, wider; sindt, sint, sinnd, sind.

In other instances two different words may be employed for the same object, as with imber and ingwer, both meaning "ginger." In some instances the correct identity of words was found only by consulting contemporary literature, some of which is listed in the appended bibliography. In other cases, however, the most extensive and specialized dictionaries were unavailing, as for example in supplying the appropriate meaning for the word metze. Here we were compelled to rely solely upon context and to resort to a note for further elaboration.

Similarly puzzling were references in the text to precious stones, including pearls, and to exotic spices, plants, and animals for which the appropriate words did not exist in German usage of that day or were unknown to the writer. Nor is this surprising since much of the subject matter is concerned with areas entirely remote from the author's observation and experience. Much of this information was undoubtedly derived from reports by sailors, captains, and travelers to distant points of the Orient. Works on natural history and geography setting forth descriptions of plants, animals, and places of the East were still very inadequate at the time this tract was published. In these matters our unknown author must be regarded as something of a pioneer.

Another feature characteristic of this newsletter is its sketchy presentation, itemizing the statements briefly and hastily in a manner resembling a news reporter rushing his copy to press without carefully reading or checking details, and frequently without any gesture toward elaboration. Some items or thoughts are unrelated and are run together without any logical coherence. In other instances we encounter incomplete sentences, rendering the passage obscure and leaving the reader in doubt as to the intended meaning. In the light of these often perplexing constructions, I felt impelled to take some liberties in making the original version more palatable to the modern reader. Some sentences were broken up and simplified; in other cases the thought, highly condensed, was expanded to set forth the meaning with greater clarity. Only rarely was it deemed necessary to interpolate a word or phrase. In general, the aim was to preserve as far as practicable the flavor of the original and let the author speak directly across the span of 450 years to his modern audience.

To gain historical background and perspective necessary for a fuller appreciation of events and descriptions set forth in this tract, I read widely in pertinent and authoritative books listed in the bibliography. To many of these authors I am indebted for valuable and illuminating information.

Not the least perplexing item to be dealt with is the woodcut appearing on the title page of the newsletter. An explanation which is appropriate, and which is concurred in by Dr. Walther Matthey, librarian of the Germanisches National-Museum in Nuremberg, is to be found in the printed version of Amerigo Vespucci's letter to Lorenzo de' Medici, first appearing under the title Mundus Novus in 1504. This description of his navigation into the southern hemisphere along the coast of South America contains an explanation of the geometric relationship between Lisbon and a point fifty degrees south of the equator: ". . . we who live in Lisbon, thirty-nine and a half degrees north latitude this side of the equator, are with respect to those fifty degrees beyond that same line, south latitude, at an angle of five degrees on a transverse line. And that you may the more clearly understand: a perpendicular line drawn, while we stand upright from a point in the sky overhead, our zenith, hangs over our head; it comes down upon their side or ribs. Thus comes about that we are on an upright line, but they on a line drawn sidewise. A kind of orthonogonal triangle is thus formed, the position of whose upright line we occupy, but they the base; and the hypotenuse is drawn from our zenith to theirs as is seen in the diagram." 1

To illustrate this concept Mundus Novus contains a triangle with a base which represents fifty degrees south latitude and a perpendicular line representing Lisbon at thirty-nine and a half degrees north latitude. The perpendicular line is placed to the right, and the base extends to the left, implying a westerly direction.

The triangle in our woodcut is more illustrative, with a European figure to represent Lisbon, and a native to indicate some southern region. From the comparative length of the height and base of the triangle it would seem to designate a region approximately thirty degrees south of the equator if the perpendicular line represents Lisbon at thirty-nine and a half degrees north latitude. Since the perpendicular line in this instance is on the left and the base extends to the right, or east, it can be concluded that the mass of land shown is intended to indicate Africa.

The engraver, therefore, has used a technique which was current for the description of the geometric relationship between the northern and southern hemispheres, and added to it illustrative material to make an informative and attractive title page.

In view of the numerous problems encountered in this translation I felt obliged to consult other scholars with reference to textual questions. I am especially indebted to my col¬league Professor Lynwood G. Downs, and for his competent assistance gratitude is expressed. Much credit is due also to Dr. Walther Matthey, librarian of the Germanisches National-Museum in Nuremberg, for his continued and most helpful assistance, based upon resources not locally available. As translator, of course, I assume full responsibility for any in¬accuracies or deficiencies in this translation.