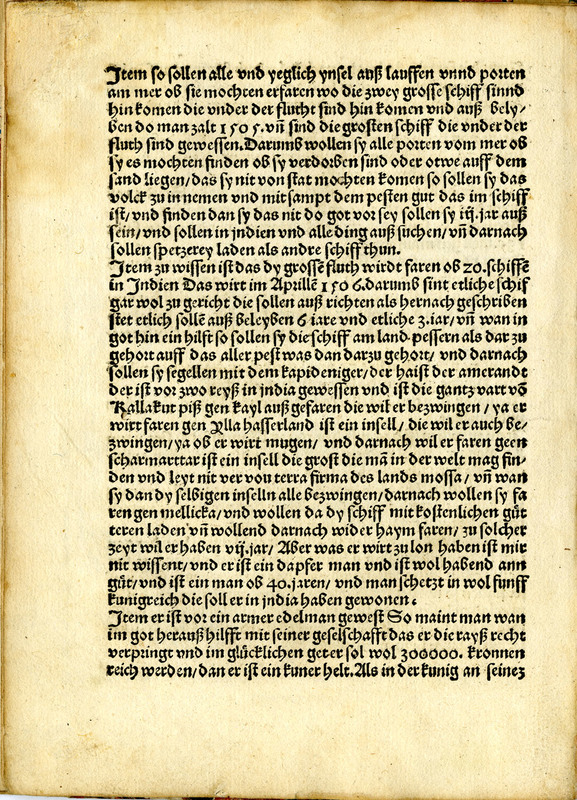 1. A copy of Mundus Novus [Augsburg, 1504] is in the James Ford Bell Collection. The translation of Vespucci's explanation of the triangle is taken from George T. Northup's translation, published by Princeton University Press in 1916.

2. The point indicating Lisbon is apparent on the map, but the letter "L" was omitted.

3. If these "miles" are converted to Portuguese leagues of four miles each, some of the distances given approach correctness. The errors in the distance between Cape Verde and the Cape of Good Hope, and from Malindi to Anjediva, are so great as to indicate typographical errors.

4. Sailing from Lisbon for India in November was a radical departure from usual practice, since all of the previous fleets, except the first expedition of Da Gama, had sailed in March or April. This enabled them to take advantage of the southwest monsoon which blew from Africa toward India in the late summer months.

The three ships mentioned here were those sent out under the command of Cyde Barbudo and Pedro Coresma by King Manuel. They were ordered to cruise the coast of Africa from the Cape of Good Hope to Sofala, and attempt to learn the fate of Francisco de Albuquerque and Pedro Mendoza. (See note 6.) Joao de Barros in his Asia (Lisbon, 1552), I, 116, states that they departed from Lisbon in September 1505.

5. The quintal and bahar were the common units for measuring spices. A quintal was slightly in excess of one hundred pounds, and a bahar consisted of four quintals and six pounds.

6. The ships being sought were from two previous fleets. Francisco de Albuquerque departed from Lisbon on April 14, 1503, in command of three ships which were a part of a larger fleet. One of his ships was lost on the way to India, but the other two loaded cargo and sailed from Cananor on February 5, 1504. These ships were never heard from again. Pedro de Mendoza commanded a ship in the second fleet of Vasco da Gama which sailed for India on April 22, 1504. Mendoza's ship was stranded at St. Braz in southern Africa, and was never found.

7. This is a reference to the fleet sent out on April 18, 1506, under the general command of Tristão da Cunha. Five of the twenty-one ships, however, were commanded by Afonso de Albuquerque.

8. This is a reference to Afonso de Albuquerque rather than Tristão da Cunha. Albuquerque sailed with the rank of captain in the fleet, but he was destined for a much higher office — he carried with him secret instructions that after three years he was to be viceroy of India, replacing Francisco de Almeida. Albuquerque had made one previous trip to India, in 1503. "The past two voyages" refers to those since that of Albuquerque. In April 1504, Lopo Soarez de Algabaria led a fleet of thirteen ships to India, and in March 1505 Francisco de Almeida was sent out as viceroy with a, fleet of twenty-two ships. Three of these ships, the Rafael, the Lionardo, and the St. Jeronimo, were equipped and financed by a German-Italian company. Two Germans accompanied the fleet; they were Balthasar Springer, a company official, and Hans Mayr, who was an official in the service of the Portuguese king.

9. The region of Albuquerque's operations was from Calicut to Quilon, and there is no indication in the Commentaries of Albuquerque that he went as far to the southeast as Caell. It is probable that the author confused Quilon with Caell.

10. Ylla Hasserland refers to the island of Socotra near Arabia, for it was this island that Albuquerque and Da Cunha conquered in 1507 on their way to India. Socotra was known to antiquity for its production of aloe, and the name Hasserland appears to be a corruption of the Portuguese word for aloe, namely azeure.

11. Probably Tenasserim, a region of the Malay Peninsula. It was designated in the sixteenth century by a variety of spellings, such as Danasagium, Tanasari, and Damasa. This latter form is the one used by Johann Ruysch in his world map of 1508, which is the nearest major map in point of time to this account.

12. The Portuguese reached Malacca in 1509 when Diogo Lopez de Sequeira arrived there only to be denied the right to trade, and some of his crew were held as hostages. Albuquerque's expedition to Malacca, foreseen here, was undertaken from Goa in 1511.

13. The original "kapitanieren," a verbal form, is most likely to be interpreted as referring to those men high in the royal command of army and naval forces and constituting an advisory council to the king.

14. Mellacka here must refer to Mecca. The Portuguese success in India aroused the Sultan of Egypt, with Venetian assistance, to build a fleet with which to contest Portuguese supremacy in Indian waters. This fleet was readied at Jidda, the port city for Mecca, under the command of Egyptian Admiral Mir Hussein.

15. This Portuguese complacency was somewhat premature, since the Sultan was able in 1508 to send a fleet to Chaul where a three-day battle took place with the Portuguese fleet commanded by Lorenco de Almeida, the viceroy's son. The battle was indecisive, but the Portuguese retired to Cochin after Almeida was mortally wounded.

16. The word droperey, if taken literally, might be understood to mean "pearls." It would then be related to the N.H.G. Tropfen, English "drop," and suggest the droplike shape of pearls. However, and this may be more likely, should this be a misprint for a more appropriate spelling of drogerey, the meaning of "drugs" is apparent.

Ptolemy and Pliny noted the Persian Gulf as a great source of pearls, and subsequent travelers such as Benjamin of Tudela, Ibn Ba¬tuta, and Ludovico Varthema described Ormuz as the location of an important pearl fishery. Throughout history it has been the world's most valuable source of pearls.

Caell, with various spellings, was an important source of pearls, as it was located on the Indian mainland opposite Ceylon's great pearl fishery in the Gulf of Manaar.

17. These "dogs and cats" are a reference to the musk deer, an animal native to Tibet, the Himalayan region, Siberia, and western China. This animal is about twenty inches high and from the standpoint of size, could be confused with a dog or cat. Its distinguishing feature is a sac on its abdomen, containing a gland which secretes a substance with an odor more persistent and more penetrating than any other known substance. This secretion was much sought after for medicinal uses and for perfumery.

18. The word metze, meaning "coconut," as is obviously intended in the present context, cannot be verified in any currently available German dictionary. Etymologically this word may plausibly be related to the English word meat in the meaning of food in general, especially solid food, hence as here the edible part of a coconut. However, in an old German dictionary, published in Nuremberg in 1482, is found the word mozza, meaning in German "Muskatnuss (nutmeg), a word presumably taken over from a currently familiar Portuguese word which appears in modern Portuguese as noz moscada (both words ultimately derived from Latin: nux, nucis; museum, meaning fruit of the tree mirística). Metze could accordingly be derived from mozza.

19. Of all the unusual words encountered in this newsletter, Alcaldy has been the most elusive and puzzling. No dictionary or geographical gazetteer revealed any clue. The translator suggests as a possible, per¬haps plausible, explanation that Alcaldy may be of Arabic origin, composed of the definite article al and Kaldu, referring to Chaldaea, or Mesopotamia, and ultimately to Arabia. Hence we may be justified in interpreting "cats of Alcaldy" as civet cats coming from Chaldaea or possibly from Arabia, either country being well within the geographical province of our text. The civet cat, like the musk deer, secretes a substance useful for perfumery. (Cf. Encyclopaedia Britannica, fourteenth edition, Vol. V, pp. 194-95.) Among the Portuguese this animal was referred to as "kato de Agali." (Cf. Zedlers Lexicon, vol. 62.) In the same lexicon by Zedler (vol. 1) Alcaladie is identified as a province in Fez in Morocco. Since civet cats are found also in the area of the Atlas Mountains in Morocco, it may be assumed that this term was applied to the same animals found in Asia.

20. In this the author is badly misinformed. Zedoary is not an animal product, but the product of a plant native to India and China whose rootstocks were used in medicine.