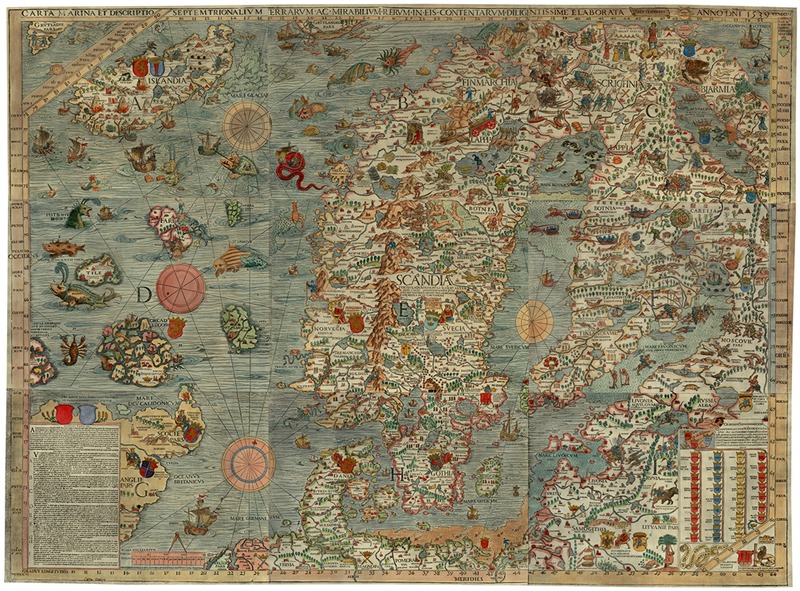 The Carta Marina is a fascinating map of Scandinavia from the 16th century. It was the first large-scale map of a European region. The portrayal of the Scandinavian region, while still not accurate, was more accurate than earlier maps. The illustrations remain beautiful to this day.

The map was created by Olaus Magnus (1490-1557). It was first published in Venice in 1539. The map was created in response to 1482 edition of Claudius Ptolemy’s Geographia. This book of maps and texts was a translation of Ptolemy’s atlas of the world, created around the year 160 CE. The 1482 edition was published in Ulm, Germany by Lienhart Holle. It was translated by Jacopo d’Angelo, and edited by Nicolaus Germanus. It was supposed to have the most accurate and up-to-date maps available to that time. This critical edition of the Geographia was a reference book of great importance, a careful, scholarly edition of a book that influenced European geographical thought for centuries.

Olaus Magnus was from Scandinavia, and he knew that Ptolemy’s depiction of that part of the world was very wrong. Ptolemy had very little information about Scandinavia. Olaus decided to create his own map of Scandinavia, and so the Carta Marina came into being.

The Carta Marina →
About the Exhibit