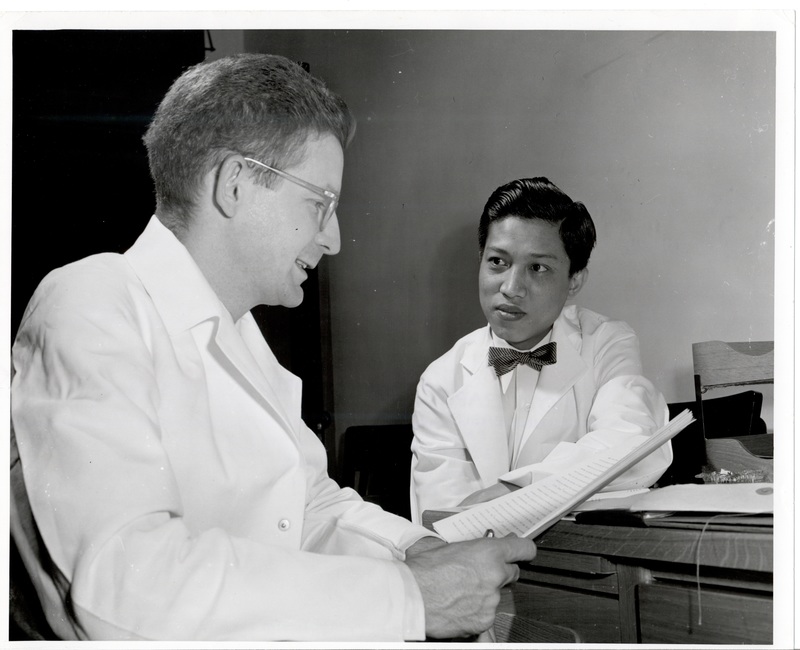 F. John Lewis speaking to a medical resident at the University of Minnesota Medical Center

In addition to Clarence Dennis' experimentation with a heart-lung machine, other members of the Department of Surgery were actively involved in cardiovascular research - work that was often inspired by others.

In September and November of 1950, the Annals of Surgery published papers by Wilfred Bigelow et al. of the University of Toronto which reported the results of experiments with hypothermia as a potential method for intracardiac surgery. The papers reported that when the temperatures of research dogs were cooled to 20 degrees Celsius (68 degrees Fahrenheit), it lowered the oxygen needs of the major organs and tissues to 15% below that of normal body temperature.

It was widely known that if the heart was stopped for more than 2 or 3 minutes, permanent damage occurred to the major organs and tissues of the body. Hypothermia offered a way to potentially lengthen that time.

Bigelow reported suspending circulation in research dogs for up to 20 minutes without any harm to the animals - enough time to potentially repair a congenital heart defect. Bigelow predicted, "Such a technic might permit surgeons to operate upon the 'bloodless heart'..."

Inspired by these results, assistant professor F. John Lewis, assisted by surgical resident Mansur Taufic, began a series of experiments to induce hypothermia, interrupt circulation, and correct a defect in the wall dividing the inner chambers of the heart.