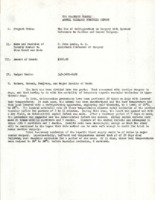 Grant Progress Report, "The Use of Refrigeration in surgery..."

F. John Lewis and Mansur Taufic subjected a group of research dogs to two operations. In the first operation they induced hypothermia by wrapping the dogs in rubber cooling blankets to lower core body temperature.  The dogs were anesthetized and then intubated to maintain artificial respiration - the same preparations that would be made for surgery on human patients.  An incision was made in the chest, and the two large veins that carry deoxygenated blood to the heart - the superior and inferior venae cavae - were clamped to create a bloodless field within the organ. Lewis and Taufic then clamped the pulmonary artery, which carries blood to the lungs to be oxygenated, to isolate the heart from the rest of the body. An incision was made in the right side of the heart, and a tube was inserted in the wall that divides the upper chambers to create a hole - an atrial septal defect.  The surgeons closed the heart incision with sutures, released the clamps on the venae cavae and pulmonary artery to return blood flow to the heart and restore circulation, and sewed up the chest.  Approximately one week later, they again operated on the dogs, this time to close the hole they created during the first operation.  In each of the procedures, blood flow to the heart was occluded from between 3-11 minutes.

Lewis reported in April of 1952 that "Results have been encouraging enough so that the study will be continued in the hopes that this method can be made safe enough to merit its trial in human cardiac surgery."