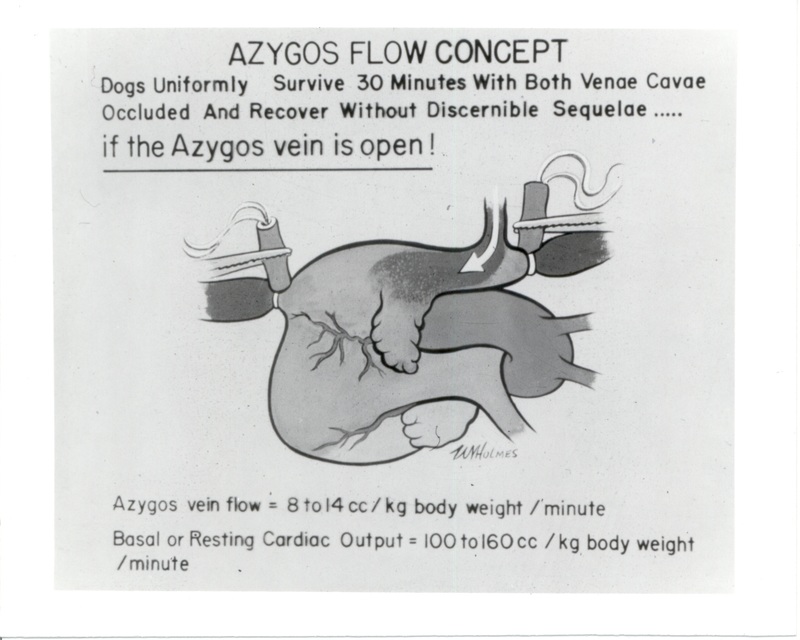 Illustration of the azygos flow concept for open heart surgery

In 1952, C. Walton Lillehei and Morley Cohen read an article published in the British Journal of Surgery by A.T. Andreasen, and F. Watson, which reported the discovery of the “azygos flow principle,” a factor that provided great implication to their own research.

The azygos vein is a blood vessel that carries a small amount of deoxygenated blood from the body into the right side of the heart.  The vein acts as an alternative path for blood flow when the main blood vessel carriers, the superior and inferior venae cavae, are blocked.  In Andreasen and Watson’s study, as long as the blood flow through the azygos vein was maintained, dogs survived 30 minutes of venae caval occlusion with no damage to major organs and tissues.

Cohen proceeded with a series of experiments in which he clamped the venae cavae and measured the blood flow of the azygos vein to the heart.  He determined that the flow rate was approximately 10% of the total rate in which blood naturally flowed throughout the body.  The discovery that this miniscule amount of blood flow could safely sustain bodily function in a resting state was a ground-breaking realization.