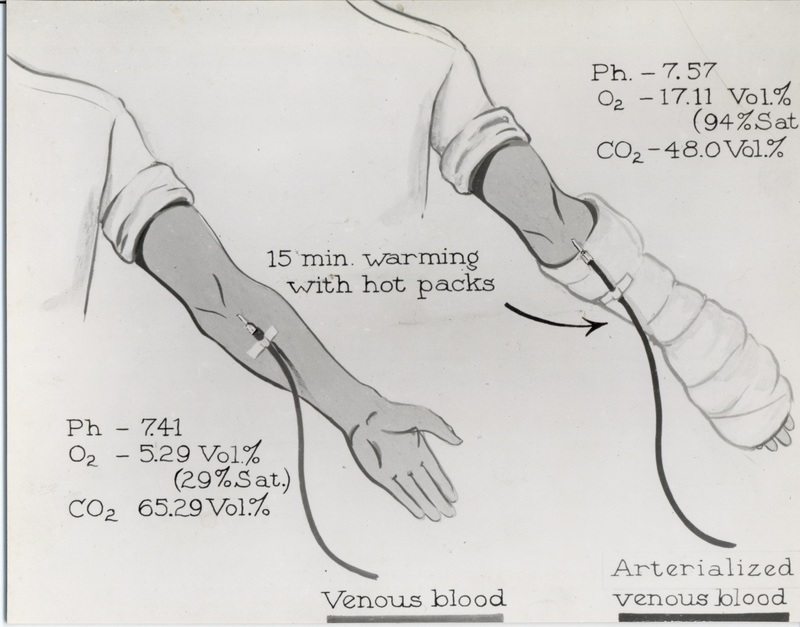 During operations on infants and small children it was observed that a low volume of oxygenated blood was needed to maintain circulation during surgery - an amount that could be delivered from a reservoir rather than a live donor.

Research on blood chemistry demonstrated that when warmed, samples of deoxygenated (venous) blood began to resemble oxygenated (arterial) blood in consistency. Further study in the research laboratory confirmed that warmed “arterialized” venous blood could potentially be used to deliver oxygenated blood to patients during surgery.

To obtain the 4,000 cc of arterialized venous blood needed for operation, the arms of multiple donors were submersed in a water bath at 45 degrees Celcius for 15-20 minutes, after which 500 cc of blood was collected from each donor.

Using the same pump utilized for cross circulation, venous blood was withdrawn from an artery in the patient, which flowed through plastic tubing to an empty collection reservoir.  Simultaneously, the collected arterialized venous blood was pumped from a separate reservoir to the patient through tubing connected to a major vein.

The method of continuous arterial perfusion was first used in March of 1955 and was used in 5 operations until it was replaced with a less complicated method.