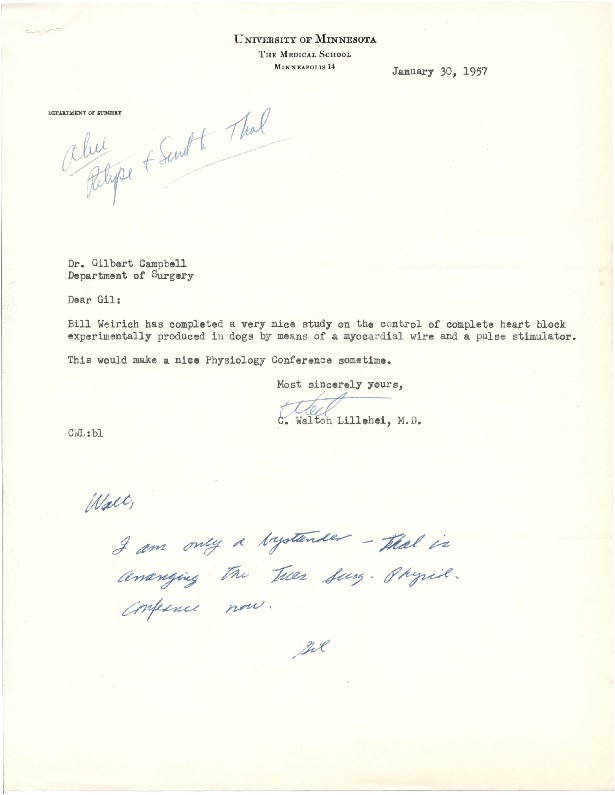 Correspondence, C. Walton Lillehei to Gilbert Campbell regarding arrangement of a Physiology Conference on the topic of management of complete heart block with a pacemaker

At an August 1956 mortality and morbidity conference, a weekly meeting held by the Department of Surgery to discuss failed operations, a case was presented of a child who succumbed to complete heart block.  Physiology professor John A. Johnson suggested the use of a Grass Physiological Stimulator, which was frequently used during training to stimulate frog hearts, for the treatment of heart block.  Inspired by Johnson’s suggestion, surgical resident Vincent Gott borrowed a Grass Stimulator from the physiology laboratory and began experimental pacing with research dogs.

Gott, who was joined by resident William Weirich in the fall of 1956, induced heart block in a series of adult dogs by placing a suture around the bundle of His, a group of muscle fibers that conduct the electrical impulses that cause the ventricles to pump blood.  An electrode connected by wire to the Grass Stimulator was inserted into the lower chamber of the heart and another electrode was sutured just beneath the skin.  The researchers tested variable voltage levels and the rate and length of delivery, and were able to obtain complete control of the animal's heart rate by setting the stimulator to deliver a repeated low charge that averaged less than 2 volts.

On January 30, 1957, when a 2-year-old girl undergoing repair of a ventricular septal defect developed heart block, Lillehei called Gott and Weirich and asked them to bring the Grass Stimulator and electrodes from the laboratory to the operating room.  Lillehei successfully inserted the wire into the patient’s heart, and began successful pacing with the Grass Stimulator.

By 1958, the method of pacing with a Grass Stimulator and electrodes was employed in 18 patients that developed post-surgical heart block.  Seventeen patients returned to normal heart rhythm, and one death occurred.