Though the success of treating heart block with the Grass Stimulator and electrode was initially promising, there remained a glaring limitation to the method.  As the stimulator was powered by the electrical current from an AC wall outlet, long extension cords had to be strung throughout the hallways of the hospital in order for heart block patients to be moved from the operating suite to a recovery room.  Further, should there be a power outage and the hospital generators failed, the lives of heart block patients were at risk.

Recognizing these limitations, Dr. C. Walton Lillehei approached a graduate student in the physics department about the development of a battery-operated pacemaker.  Before the student was able to produce a functioning model, a city-wide blackout in October of 1957 prompted a renewed sense of urgency for which a battery-operated pacemaker was needed, causing Lillehei to seek other sources to construct the device. 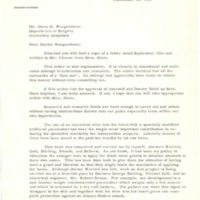 Correspondence, C. Walton Lillehei to Owen Wangensteen regarding research funds for the treatment of heart block and development of a transistorized battery-operated pacemaker 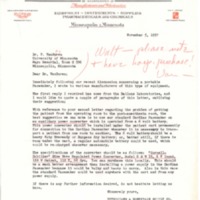 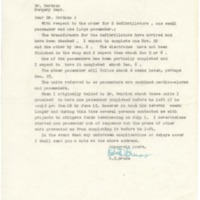 Correspondence, Robert Bruss to Dr. Cardozo regarding an order to construct two defibrillators and two pacemakers 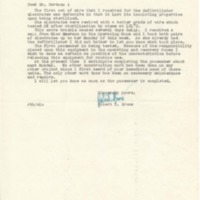 Correspondence, Robert Bruss to Dr. Cardozo regarding the construction of a defibrillator and pacemaker