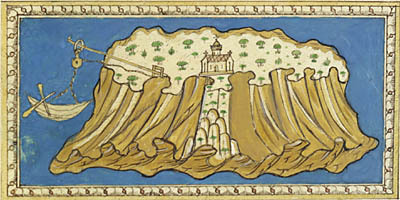 Some fifteenth-century texts combine illustrations and maps useful for navigation. One example in the James Ford Bell Library is a manuscript dating from ca. 1475 CE by Henricus Martellus. This work is based on awork by Florentine priest Christoforo Buondelmonti (ca. 1385-ca.1430), Descriptio Archipelagi et Cicladum aliarumque Insularum (Description of the Archipelago, the Cyclades, and the other islands), which was written at Florence in 1420 CE.  Buondelmonti wrote from personal experience, having traveled throughout the Aegean for several years.

The subject of the manuscript is the islands in the Aegean sea. Although the text is closely related to the maps, it is not specifically nautical (Howse 1973, 17 for commentary on the manuscript Liber Insularium in the National Maritime Museum).  Henricus Martellus Germanus was born Heinrich Schlüsselfelder, the son of a Nürnberg businessman.  From 1448 to 1496 he lived in Florence, a scholar in the household of the wealthy and influential Martelli family, whose name he adopted (Böninger 2006). 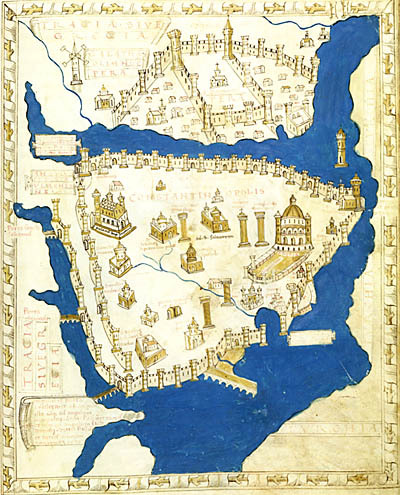 This map of Constantinople reflects the important port city as it was when Buondelmonti saw it in the first quarter of teh 15th century, still in Christian hands.  The Muslim Ottomans conquered the city in 1473.  This raises the question of when Martellus made his copy of Boundelmonti's book:  before 1473 because he depicts the Christian city or, if after the conquest, did he make a conscious choice to leave the city as it was in Buondelmonti's original rather than update the map to reflect its current status?