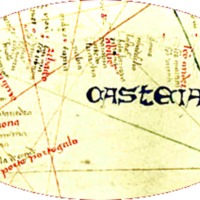 Portolan charts were surely used for planning voyages as well as during them. The owners, investors and others involved in a voyage would have used them for determining routes, deciding the best times for sailing and return, identifying places to stop for trade, to seek refuge from pirates or to head for if the ship needed repairs. The important coastal places were indicated in red. They were crucial if the ship ran into trouble from weather or enemies. 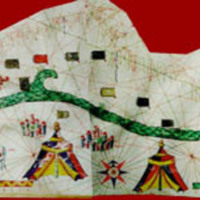 Images in the interior of a portolan chart are usually elaborate portrayals of cities, mountains, animals, etc. which, except for rivers, were not important for navigation.

They are decoration, of course, but also demonstrate that portolan charts were used not only for voyages, but to please a viewer with artistic images and to provide a world view. This latter purpose becomes increasingly common in the sixteenth century, when charts incorporate the geographical information resulting from European voyages to the Americas. 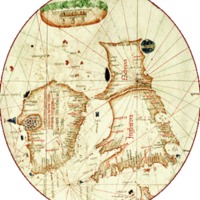 Most probably a portolan chart used during a voyage was far less elaborate. The assumption is that the navigator would align the keel of his ship along the rhumb line that led most directly to his destination, in order to make the best time on the voyage. The pilot maintained the course of the ship as close to the planned route as possible. Rhumb lines and the compass would help him to adjust the route as needed, and the scale gave him the distance he had to travel.

Strictly speaking, portolan charts have no "up" or "down" and north is not necessarily at the "top" of the map. They were made to be turned in whichever direction the traveler was headed, so that writings on the coasts of England and Ireland, for example, are placed so the viewer is looking south to read them.

All the same, the portolan charts with their use of the compass and the prominence given to the compass on them, helped to establish the practice of orienting European maps toward the north.

← How Were Copies Made?
The Islands: An Ongoing Debates →
Unsolved Mysteries of the Portolans
How Were Portolans Used?