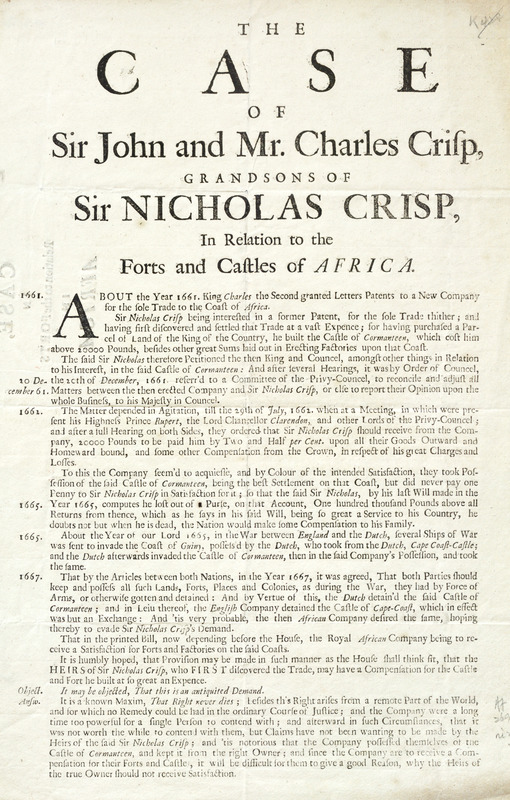 English trade into West Africa was established sometime in the mid 16th century, but until 1663 it remained relatively small in scale.  Small trading companies, such as the Guinea Company, run primarily by shareholder Sir Nicholas Crisp, were created and dispatched to Africa, but they did not remain in operation very long.

Early African trade focused on bringing African commodities such as gold and ivory into England for English use. In the 1630s and 40s, English trade with Africa became dependent on a heavier flow of commerce between West Africa and the Americas, and it was also about this time that the Englishmen in West Africa began to regularly engage in the slave trade.

In December 1660, after the Restoration of the House of Stuart, trade in Africa was addressed with newfound vigor and the charter for the Company of Royal Adventurers was signed, a new trading company devoted to English trade in Africa. In 1663, a new charter for the company was signed, this time explicitly listing the slave trade as an objective of the company. By 1672, the Company of Royal Adventurers was granted a monopoly on English trade in Africa, and became known instead as the Royal African Company.

The Case of Sir John and Mr. Charles Crisp, grandsons of Sir Nicholas Crisp, in Relation for the Forts and Castles of Africa

Sir Nicholas Crisp was the primary shareholder of the Guinea Company chartered in the early 17th century, and one of the most dominant figures in establishing English presence in West Africa years before the Company of Royal Adventurers was born. Much of the initial cash outlay, funds spent for the operation of the company, especially for buildings and fortifications, came out of Sir Nicholas's own pocket, and not all of these payments were reimbursed. This particular broadside, authored by two of Sir Nicholas’s heirs, summarizes his contributions in an argument for the crown to repay its debts to Crisp to his grandchildren.  By making their case public, the heirs hope for a favorable response in the court of public opinion, which they believed would influence the government.