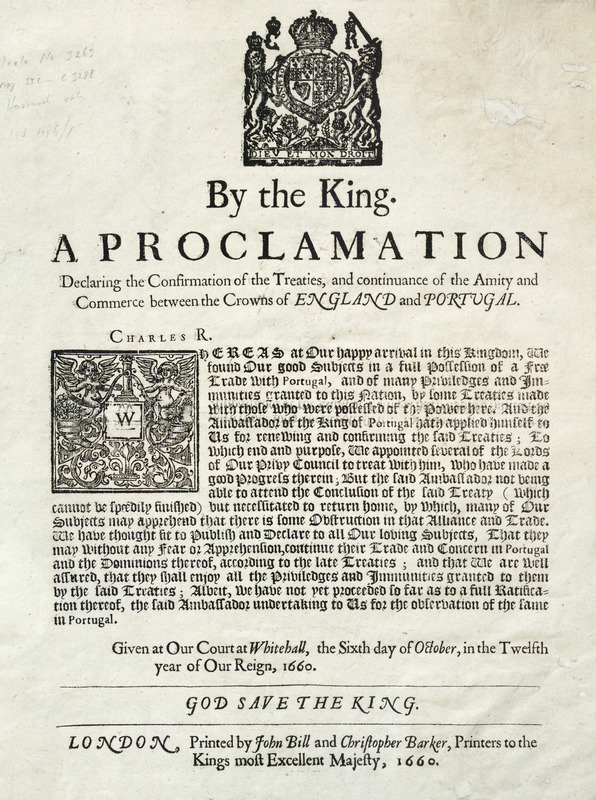 In 1661, just barely a year after the House of Stuart’s restoration to the throne, a marriage treaty between Charles II of England and the Portuguese princess, Catherine of Braganza, was signed and put into effect. There were several economic benefits allotted to England through the marriage, but by far the most popular clause was the inclusion of  Tangier in the princess's dowry. Possession of this strategic port would allow England easier and safer access to several trade routes, through the Mediterranean and to the East Indies, as well.

A Marriage Treaty of Alliance between England and Portugal

Political alliances between the major European powers in the 17th century were in a constant state of fluctuation, which in turn meant major fluctuations in economic alliances, as well, which affected trade routes and colonial relations. Portugal was certainly one of England’s major rivals in foreign trade and colonization, and so the alliance, as declared in this broadside produced in 1660, and subsequent marriage between Charles II and Catherine of Braganza was not overlooked by rivals of the two nations, such as the Dutch. This alliance would later be cited by the Dutch as one of their several reasons for distrust of the English that eventually led into the Second Anglo-Dutch War. 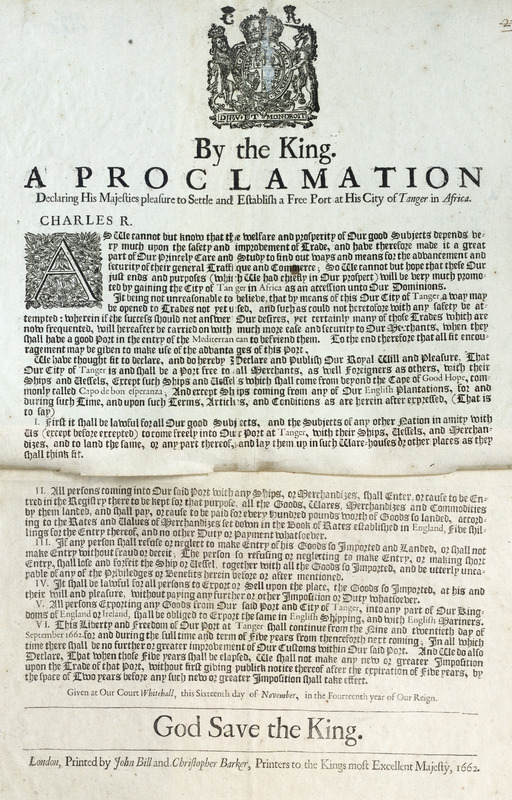 England's establishment of a free port in the city of Tangier

As outlined in this broadside, produced in 1662 under Charles II, just after the marriage and subsequent English acquisition of Tangier, the benefits of Tangier’s location were obvious and enticing.  Its position at the Strait of Gibraltar, which separated the Mediterranean Sea from the Atlantic Ocean, promised not only potential as a strategic trading post in waters that were historically unfriendly towards English ships, but the English crown also saw Tangier as a promising starting point for a new English North African empire.

While these hopes were high, they also were short lived. By 1664, rising tensions with the Dutch over the English capture of the colony of New Netherlands in the Americas left the English reluctant to continue to fund (in both money and manpower) exploration, and by 1665 with the Second Anglo-Dutch War in full effect, the colony of Tangier was faced with stunted expansion and crippling neglect. In 1672, King Ismaïl Ibn Sharif ascended to the throne of the Morroccan Aloaouite dynasty, a powerful and fearsome adversary to the English colonists, and by March 1684, after deeming the port to be a lost cause, the last English ship sailed away, and possession reverted to the Moors.