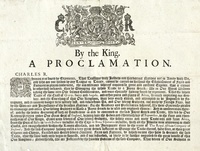 This Broadside here was made to explain to English merchants the unique trading rights of the Royal African Company, a trading company that was run by the English Government in the 17th Century. In 1672 as the company grew, it began to become seriously invested in the Atlantic slave trade, taking people from West Africa across the Atlantic Ocean where they would be sold as slaves to work for other people in the Americas without pay. Because slavery was not abolished for almost 200 years after the Royal African Company began taking people from West Africa, slavery remained a dominant business in the Americas, despite the number of human lives it cost.

← The Broadside
Trade Between Colonies →
Young Scholars
The Slave Trade