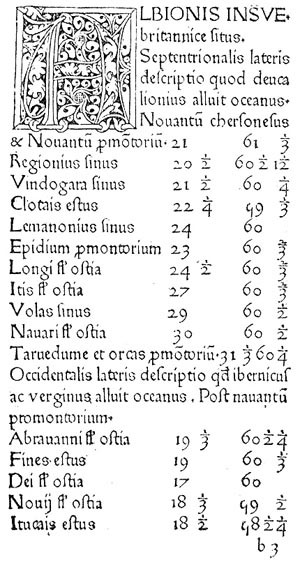 An example of text with latitude/longitude readings from Ptolemy, Cosmographia. Ulm: Lienhart Holle, 1482.

Ptolemy stresses the importance of locating places on the earth exactly, not only in relation to each other, but also to the heavens.

He uses a system of coordinates, called a grid or graticule, to locate places on the earth. The grid on the earth is related to the grid in the sky that turned about the pole star, which was used in measuring latitude in the northern hemisphere. Through this combination between mapping the heavens and the earth, Ptolemy contributed to both terrestrial and celestial mapping, and reinforced the importance of astronomy to geography. He was the first writer to employ the terms "latitude" and "longitude" in his mapping.

Coordinates are given for 8,000 places. Latitudes were based on the length of the longest day of the year; longitudes were determined on a scale of time, with 15 degrees equal to one hour. This is the globe we know today, with 90 degrees from the equator to each pole, indicating latitude north and south of the equator.

The equator is divided into 360 degrees, and the lines of longitude on it divide the earth into twenty-four hours of time.

Since zero longitude began at the Fortunate Isles and most travelers from whom Ptolemy received information were in Alexandria, the figures were often wrong. Ptolemy knew this. The 180 degree world he showed ends in the east in the middle of China.