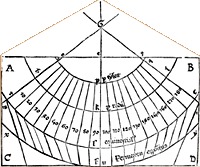 A second projection is more complicated. It is called a "cloak" (chlamys) projection. Both lines of latitude and longitude curve in this projection, so it provides a far more satisfactory image of the earth’s shape. It is also much harder to draw. 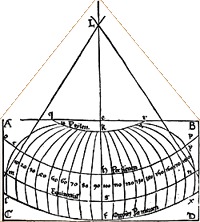 "Although for these reasons this method of drawing the map is the better one, yet is less satisfactory in this respect, that it is not as simple as the other; . . . Since this is so, even though for me both here and everywhere the better and more difficult scheme is preferable to the one which is poorer and easier, yet both methods are to me retained for the sake of those who, through laziness, are drawn to that certain easier method" (Ptolemy 1932, 45).

He describes a third projection, more complex even than the second, which was very rarely attempted by mapmakers until late in the sixteenth century. It resulted in an oval map of the world. It is worth noting that in several of the early printed editions of the Geographia, the world map is designed on the "easy" first projection!