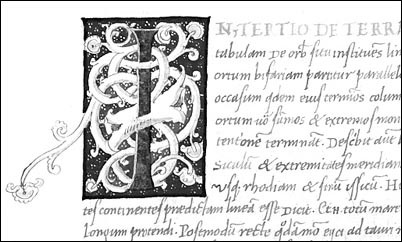 "If I have seen further it is by standing on the shoulders of giants."
Sir Isaac Newton in a letter to Robert Hooke, 5 February 1676

The writings ascribed to Ptolemy have raised questions about how one man during a lifetime could study and produce so much. Did Ptolemy write all of the works ascribed to him? How much is original and how much is taken from earlier writers? It is difficult to know, because many of the texts of the earlier writers cited by Ptolemy have not survived. In some cases the commentaries of Ptolemy on these writers is the only source for what they said. Certainly Ptolemy was a great synthesizer, a compiler whose writings depended on the research of others as well as on his own. Without him much of the legacy of Greek knowledge in his fields of study would have been lost.

At the library at Alexandria, Ptolemy had access to thousands of manuscripts, a vast cornucopia of earlier thought. For his Geographia, Ptolemy incorporated ideas from several writers, for example: Hipparchus of Nicaea (180-125 B.C.), the inventor of the astrolabe, who promoted the use of astronomical observations for the accurate measurements needed to make maps; Poseidonius (186-135 B.C.), whose estimate of the size of the earth–about three-quarters its real size–Ptolemy adopted;

Strabo (63? B.C.-?24 A.D.) who wrote a geography in seventeen books compiled from earlier writers, most of whose texts have not survived. Two known copies of the first Latin translation of Strabo exist, made in Italy in the 1460s or 1470s. One of them is in the James Ford Bell Library.

Like Ptolemy, Strabo preserved for posterity much Greek geographic thought. Strabo stressed the importance of astronomy to cartography and wrote that a globe, at least 10 feet in diameter, was the best means to portray the world.

That Ptolemy built on previous scholarship does not diminish his own contributions. Brown summarized his work: "Ptolemy was a man of wide learning who possessed an exceptionally orderly mind and a remarkable gift of exposition. His original contributions to science may have been few, as some writers suggest, but he was never guilty of plagiarism. He improved most of what he copied and developed the ideas he borrowed. He repeated many of the important theories of his predecessors, but stated them better and more clearly. He usually gave credit where credit was due" (Brown 1979, 58). It may be better to think of Ptolemy’s writings as emanating from a group of scholars, not one. But a single mind had to bring this knowledge together, organize it and present it to his readers.

Some ideas that Ptolemy accepted were wrong. Ptolemy did not guess about the part of the earth that he did not know. His world map depicted only 180 degrees east to west and approximately 90 degrees north to south, or about one fourth of the earth altogether.

Ptolemy incorporated both truth and error from the thoughts and writings of scholars who preceded him. This is no different than scholarship today.