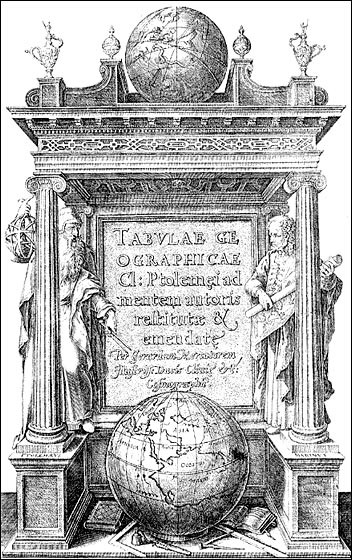 The sources that Ptolemy cites most consistently are the maps and writings of Marinus of Tyre (ca. 70-130 A.D.). Ptolemy’s commentaries on Marinus are the only records remaining about the latter’s work, as none of his maps or texts has survived. Ptolemy says that he adopted ideas and practices of Marinus.

The port of Tyre, located in the eastern Mediterranean in what is now southern Lebanon, was a Phoenician center of trade and culture, and famous for its purple dye. Alexander the Great captured the city in 322 B.C., and the city later passed from Greek to Roman rule. Though reduced in stature, Tyre continued to be a center of trade, and Marinus, like Ptolemy, gained information from travelers.

Ptolemy questions some reports of travel to Africa and elsewhere that Marinus accepted, and he cites errors in the boundaries of provinces that are recorded by Marinus. Ptolemy discusses and criticizes the work of Marinus at length. But in the words of Lloyd Brown: "Ptolemy was both tolerant and gentle in his criticism of Marinus; both men had their own ideas of the incredible and at times there is little to choose between their conceptions of what made sense and what nonsense. . . . Marinus was a good man in Ptolemy’s estimation, but he had allowed himself to be led astray in his scientific investigations. The world had expanded, to be sure, but not as much as Marinus indicated on his map" (Brown 1979, 65).

Following Marinus, Ptolemy put zero longitude at the Fortunate Isles (Canary Islands). On Ptolemy’s map the islands are located too near to Spain; they should have been placed further toward the west.

The east/west distance of the Mediterranean is also much exaggerated. Ptolemy criticizes Marinus for extending his latitude too far south and making his degrees of longitude too large. According to Ptolemy, "Marinus says of the merchant class generally that they are only intent on their business, and have little interest in exploration, and that often through their love of boasting they magnify distances" (Ptolemy 1932, 33).