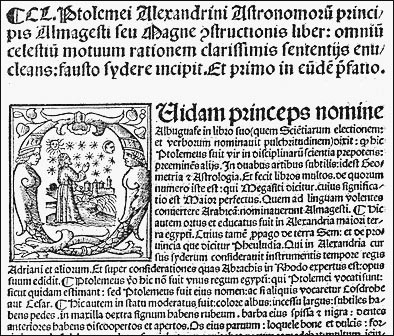 Ptolemy’s astronomical studies were the foundation of his ideas about mapmaking.

For some forty years he made the astronomical observations which are the basis for the Syntaxis, which has since become more commonly known as the Almagest, Arabic for "The Greatest." This book is the synthesis of Ptolemy’s scientific theories about the universe, where a spherical earth resided in the center of a spherical heaven. Ptolemy rejected the idea that the earth turned on its axis. In Brown’s words: "He admitted that it was a convenient explanation of the behavior of the heavens, but nevertheless ridiculous" (Brown, 1979, 59). We should not laugh too much. Many centuries later we still say that the sun "rises" in the morning and "sets" in the evening, just as it was thought to do in Ptolemy’s view of the universe!

Ptolemy’s studies in astronomy led to his principles for mapping on a precise framework. Identifying particular star locations as points on a grid requires the same techniques that are used in mapping the earth. The Almagest includes instructions for making a celestial globe with a system of coordinates (grid) for 1,022 stars, and the identification of 48 constellations. Further, Ptolemy proposed a system of dividing the 360 degrees of the globe further into the "minutae primae" and "minutae secundae" that became our minutes and seconds. The principles laid down in the Almagest are fundamental to mapping the earth, and it is significant that Ptolemy wrote the Geographia after he had completed the Almagest (Dilke 1987, 183).

No manuscript copy of the Almagest dating earlier than the twelfth century is known, when a Greek manuscript of it was translated into Latin by Gerard of Cremona (Dilke 1987, 177). At the time it seems to have evinced little notice by scholars.