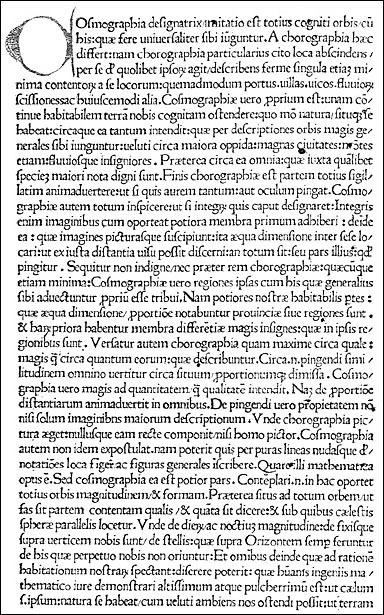 The book that has earned Ptolemy the distinction as one of the giants in European geographic thought is the Geographia (also known by the name Cosmographia).

The text of the Geographia begins with a definition: "Geography is a representation in picture of the whole known world together with the phenomena which are contained therein" (Ptolemy 1932, 25). This short definition has survived the testing of eighteen centuries!

Ptolemy defines "chorography" as mapping small areas: "selecting certain places from the whole" and which focuses down to farms, harbors, villages (Ptolemy 1932, 25).

This book, written in the second century, was "lost" to scholars for over a century. When it was "rediscovered" at the beginning of the fifteenth century it became the authority for Renaissance mapmakers who used Ptolemy’s texts and the maps that were made following his directions in constructing their own maps. Ptolemy provided the model that mapmakers would use in their work. In his Geographia, Ptolemy stood on the shoulders of generations of scholars who preceded him.

It appears that once the world was seen through the eyes of the second century scholar Claudius Ptolemaeus in the form of manuscript and then in printed editions, the mapmakers seemed to be hypnotized by the force of these maps. Ptolemy made the patterns; the later mapmakers altered, copied, or completely revised them.

← Almagest
Translations and Editions of the Geographia →
Ptolemy's Texts
Geographia