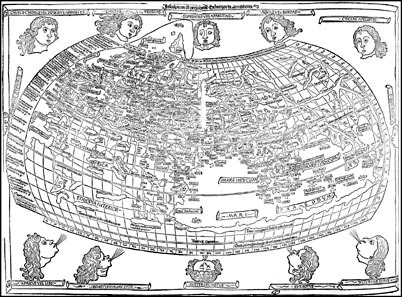 In 1482 the first edition of the Geographia published outside of Italy was printed in Ulm by Lienhart Holle.

This earliest printing "north of the Alps" marks a division between "southern" and "northern" editions of the Geographia. The Ulm edition of 1482 is much different than the Italian editions. The most obvious difference is in the look of its maps, which were printed from carved wood blocks rather than copperplate engravings.

The world map is credited to Johannes Schnitzer of Armsheim (Johannes the blockcutter). One peculiar feature is that he reverses the capital letter "n" in his woodcutting, making it possible to identify other maps in this atlas and other maps that he did not sign (Campbell, 1987, 32). Although the world map in this edition looks very much like other Ptolemy maps, in the north the frame of the map has been pierced by lands extending beyond it. Four new regional maps have been added to this atlas to show geographical knowledge after the time of Ptolemy. One of these depicts Scandinavia in more detail, including Greenland. 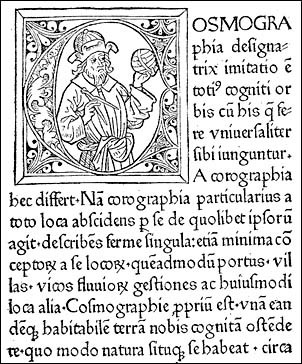 Ptolemy in an initial letter in the Geographia. Ulm: Lienhart Holle, 1482.

Because the press printed the surface of the wood left "standing" after the rest was cut away, the lines are heavier, sturdier in appearance. Even though these maps are the same maps of Nicolaus Germanus, their presentation has been changed drastically.

For both its maps and text, the 1482 Ptolemy Geographia is one of the most beautiful books ever printed. This book was reprinted in the same year of its first publication, 1482, and again in 1486. 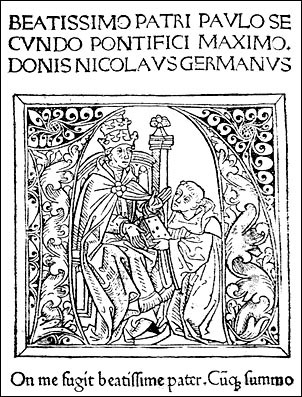 Presentation from Nicolaus Germanus to the pope from Ptolemy, Geographia. Ulm: Lienhart Holle, 1482.

Sample of text from the Geographia. Ulm: Liehnart Holle, 1482.