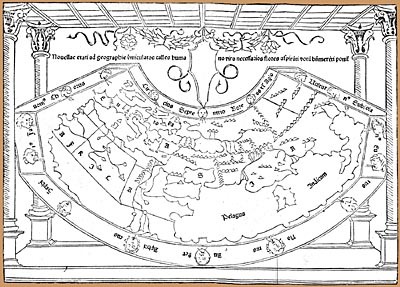 The division between northern and southern editions of Ptolemy’s maps was not inviolate.

For example, in the same year that the 1482 Geographia was published, a Ptolemaic map in the style of the world map in the 1482 atlas also was published in Venice in a book by Pomponius Mela, a first century Roman geographer.

The woodcut map is placed in an unusual setting. As Peter Whitfield writes, "The map is set within a Renaissance-style colonade drawn in perspective: the link between Renaissance art and Ptolemy’s geography is made explicit here" (Whitfield, 1994, 11).