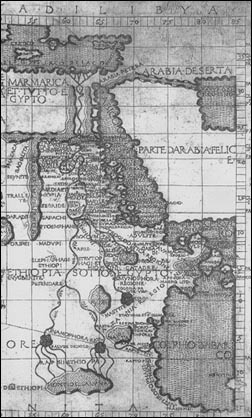 Sources of the Nile River from Ptolemy, Geographia. Florence: Nicolo Todescho, ca. 1480-82. Here is a good example for Ptolemy's definition of chorography. Note how much information the mapmaker tries to fit into the space.

Some time between 1480 and 1482 an unusual edition of Ptolemy’s Geographia appeared in Florence, printed by Nicolo Todescho or Tedescho (Nicholas the German).

The maps have been dated as early as 1472 but it is probable that the copperplates for them were engraved in 1481 and the printing of the atlas was finished in 1482 (Shirley 1983, 9). Todescho added five new maps to the 27 usually found in the Geographia, for a total of 32 maps. Some regions, for example Italy and Portugal/Spain, are portrayed in two versions, both different in their form and topographical features. These maps could well be worth studying.

Most exciting, the world map is engraved using Ptolemy’s second projection, the more difficult one. This map projection gives a feeling of depth and roundness. The engraving is particularly fine and the wind heads, for example, are most attractive. Although the engraver is not known, it seems that the artist who drew the original map may well have been Francesco Rosselli, of Florence, whose cartographic excellence has been recognized only recently.

Francesco Berlinghieri translated the text of the Geographia from Latin into Italian for this first Italian edition. Also, this same Berlinghieri parapharased the Latin prose text into Italian poetry–or at least rhymes–for this Florence edition. 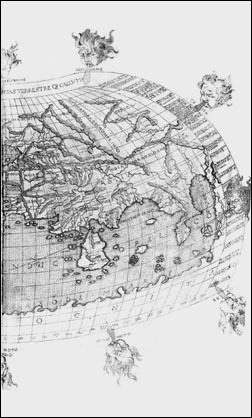