In 1507 and 1508 important "southern" editions of the Geographia were printed in Rome, edited by Evangelista Tosinus. The printer was Bernardinus Venetus de Vitalibus.

The text of the 1508 edition, in the James Ford Bell Library copy, has ornate manuscript initial letters and fine colored illustrations to accompany the text.

The copperplates used for printing the Rome editions of 1478 and 1490 were used again for the maps in these editions. The 27 Ptolemaic maps are from Nicolaus Germanus, with the world map given in Ptolemy’s first projection. Six new maps have been added; five of them are new maps of familiar regions, and one is an entirely new map.

The wonder begins with this sixth map, bound as the last map in the James Ford Bell Library copy. Johannes Ruysch made this new map of the world, which includes an extensive view of South America, islands of the West Indies, and a portion of North America.

Until the rediscovery of the maps of 1507 made by Martin Waldseemüller, the Ruysch map was thought to be the earliest printed map to show the New World. Once more, little is known about Ruysch except that he was from Utrecht and visited Cologne. Some of the features on his map suggest that Ruysch was using Portuguese sources. See the images below for examples. 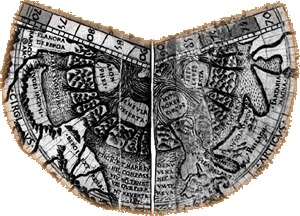 In the far north Ruysch has placed islands around the North Pole, based on reports of the travels of the English friar Nicolas de Linna (Shirley 1983, 25)

This polar cartography would be adopted by Gerard Mercator in the middle of the sixteenth century, on a Mercator map of the polar regions which encouraged the search for Northwest, Northeast and "over the pole" maritime routes. 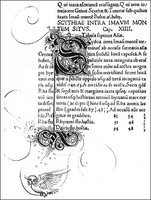 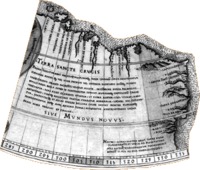 The portrayal of the southward extent of the coast of South America suggests that Ruysch was using Portuguese sources.

As does the reference to Portuguese voyages on an inscription near Taprobana.

And the reduced size of Madagascar

And the better image of India