In 1511 a new edition of the Geographia, with woodcut maps, was published in Venice.

The text was that of Jacobus Angelus, edited by Bernardus Sylvanus of Eboli. A striking feature of the text is the use of two-color printing. Most of the text is in black ink but some important names are printed in red. In order to do this the text had to be passed through the press twice, once for the printing of each color. Registration (exact placement of the pages so that the printing will be in the right place) of the pages for the second inking had to be carefully done. The twenty eight maps in this edition are also printed in two-colors, and printing the maps was even more complicated than printing the text. The maps (without the text on them) were engraved on wood blocks. For the larger maps, two wood blocks were often used for a single map. The names of towns, rivers and mountains were set in type and then inserted into the wood block, so a map and names on it could both be printed at the same time, in black ink. The names to be printed in red were set separately and were printed by a second pass of the maps pages through the printing press.

Bernardus Sylvanus wrote that he was incorporating modern discoveries into Ptolemy’s maps. Apparently, he did so; see images below.

Two world maps are found in this edition. No land connection is shown between Africa and eastern Asia on either of them. The maps have nice decorations. See the last two images below.

Bernardus Sylvanus appears to have incorporated modern discoveries into Ptolemy’s map, as evidence by the elimination of the protrusion from Scotland.

The "drooping boot" of Italy is fixed, as well. 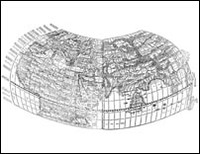 Twenty-six of the maps in the 1511 edition are on the familiar trapezoidal projection. 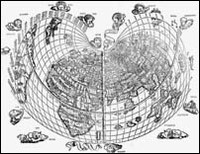 One of the world maps is on a "heart-shaped" projection, used here by Bernardus Sylvanus for the first time in a printed book.