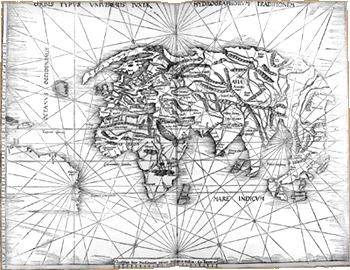 The attempt to adapt and revise the Ptolemaic maps to the geography of the world revealed in the late fifteenth and early sixteenth centuries caused confusion.

What parts of the maps were Ptolemy’s and what parts were new additions? In 1513 an edition of the Geographia, planned and initiated by Martin Waldseemüller and Matthias Ringmann but completed by Jacobus Eszler and Georgius Ubelin, was published in Strassburg. The printer, Johannes Schott, had been a classmate of Waldseemüller at Freiburg University.

The edition is distinguished for its method of presenting ancient and modern geography, by keeping the Ptolemaic maps separate from modern maps. In earlier editions, editors incorporated new information into the Ptolemaic maps, but did not specify which part was Ptolemy’s and which added. Scholars raised questions about this practice.

In this edition the 27 Ptolemaic maps are in the first part of the book, just as they were depicted in the first printed editions. The world map is on the simple conic projection; Scotland has a big protuberance; Italy’s heel is drooping.

The second part of this 1513 edition, which is titled "Supplementum," contains the modern maps and incorporates modern geographical knowledge. One of these maps is of special importance: the world map, which is a map on a projection like that of a nautical chart. This map has been called the "Admiral’s Map," in the belief that information for it may have come from Christopher Columbus.

The 1513 edition is in the James Ford Bell Library, but the binding makes it difficult to photograph.