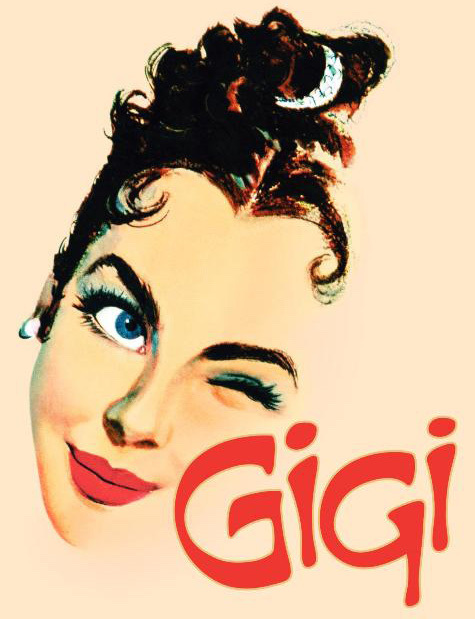 Illustration for the 1958 film adaptation of the novel GiGi

Caricature was present in the literature of La Belle Époque as expressed in the work of Colette Willy, a French writer of the early 20th century who wrote over 50 novels. Inspired by the caricaturist, Sem, Colette blended fiction and autobiography with both glamour and humor.  Colette was a bold and fearless woman of her time, initially publishing under her husband’s pseudonym “Willy” until she published Dialogues de bêtes in 1904, when she began to use her own name.

Instead of focusing on celebrity culture, Colette approached challenging topics such as women’s independence in a patriarchal world, and issues that protested the social norms and hypocrisy of La Belle Époque (Freeland "Colette, 1873-1954”).  In 1944, Colette published her last and most famous novel Gigi late in life at the age of 72  (“Colette” Oxford Reference).  Set in 1899, Gigi is Colette’s homage to La Belle Époque, with caricatures in her novel inspired by Sem’s caricatures (Dunant 47).  A coming-of-age love story threaded with comedic elements, Gigi tells how an innocent 16-year-old girl, the daughter of courtesans, is expected to display the proper etiquette of an aristocratic lady.  Gigi is raised by her aunts whose primary concerns are wealth and status, however, Gigi refuses conform to expectations and social norms in an amusing and charming way.

Gigi was adapted to the screen in 1950, as a Broadway play starring Audrey Hepburn in 1954, and finally as a musical film directed by Vincente Minnelli in 1958 (Hischak “Gigi”).  As the last great Hollywood musical, the 1958 film adaptation of Gigi directed by Vincente Minnelli, was a huge international success winning nine Oscars, including the first Best Director Oscar ever given to a musical director (Hischak “Gigi”).  The musical is visually stunning which was Minnelli’s primary concern.  Minnelli spared no expense on costumes and scenery.  He wanted full regalia and lavish scenery so the audience was completely enveloped in La Belle Époque.  Minnelli sought to capture the look and feel of the time period using artists such as Sem, Boudin and Constantin Guys for inspiration (Levy 299).  Sem’s caricatures were used in the opening credits of the film, which made for a perfect fit since Colette used them as inspiration for the novel (Dunant 47).  The cinematic caricature of Gigi is established at the beginning with the Sem caricatures and throughout the Minnelli film.