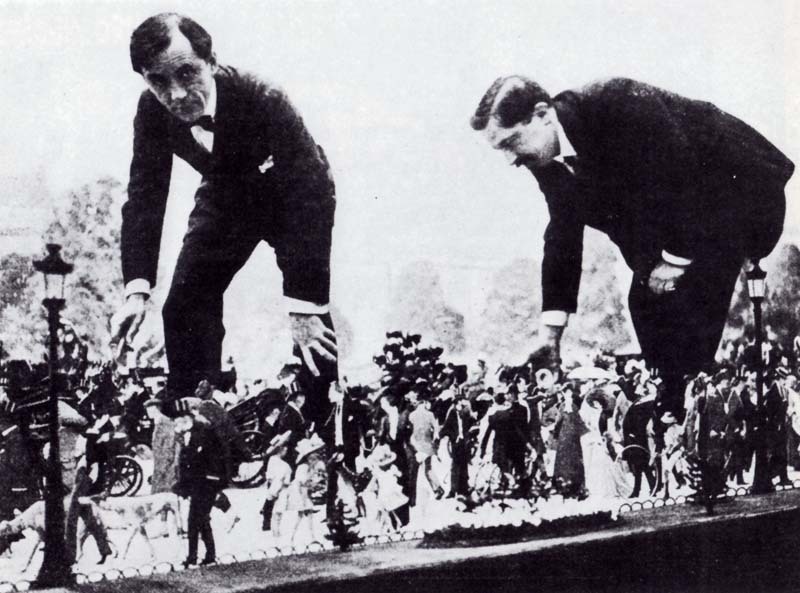 The French artist Sem (Georges Goursat, 1863-1934) built his reputation in Paris on his caricatures of prominent public figures. Born in Périgueux, Sem worked in Bordeaux and Marseille before traveling to Paris for the 1900 Universal Exposition. The first work he published in the city was Le Turf, a print album of instantly recognizable personalities at the racecourse. He began selling the album on the day of the prestigious Grand Prix race at Longchamp, and his deft ability to capture the essence of his subjects made him a success. Even the people he caricatured in Le Turf wanted a copy, and it quickly sold out.[1]

Sem revisited the subject of his first Parisian success in the Sem au Bois scroll. He drew the fashionable elite of France (and their laughable hangers-on) en route to Longchamp. The races were social events where central members of society were expected to put in an appearance.[2] Sem adopted this obligatory parade down the Bois de Boulogne as an opportunity to gently mock the celebrities of his day, caricaturing members of the aristocracy, artists, politicians and socialites. Although the individuals were not identified in the chromolithograph, a weekly newspaper, L’Illustration, published a complete list of names in its October 5, 1907 issue. The names have also been penciled in on the Gorman Rare Art Book Collection’s copy of the scroll, possibly by a previous owner who transferred the list from L’Illustration.

This scroll also contains one carriage that is not included in the image reproduced in L’Illustration. Colette, the author of Gigi, is riding in a coach driven by her husband, Willy (Henry Gauthier-Villars). Colette is seated next to her mistress, the Marquise Mathilde de Morny. Missy, as she was known, was notorious for dressing in men’s clothing and seducing a number of women. The press assiduously documented her affair with Colette, and the pair roused a scandal when they kissed onstage as part of a pantomime production at the Moulin Rouge. Their relationship does not seem to bother Willy in the slightest, perhaps because he and Colette were separated by that time.

In addition to specific figures like Colette and the Marquise de Morny, Sem has included a few generalized “types.” One example is the woman peering out the heart-shaped window of her pink, floral carriage, which is being pulled by a horse prancing in a corset, black stockings, high heels, red garters and lipstick. The caption beneath the image reads, “Hue! Cocotte!!!” Cocotte was a term for a fashionable prostitute, and “Hue!” translates to “Giddy up!” The red lantern (lanterne rouge) on the side of the carriage was a symbol that marked the brothels of Paris, and the large number 14 inside may be referring to the city’s Fourteenth Arrondissement. The Fourteenth contains Montparnasse, which would overtake Montmartre as the artists’ quarter of Paris by the 1920s. With this garishly dressed horse, Sem is likely mocking the increasing brazenness of prostitutes in these areas, a trend that was frequently lampooned in the press.[3]

Despite her high heels, this coquettish horse’s stride is surprisingly realistic. All of her fellow equines, too, are carefully posed in accordance with relatively recent discoveries about horses’ gaits. Auguste Roubille, a caricaturist who collaborated with Sem on a number of

projects, drew most of the horses in the Sem au Bois procession, and it is likely that he was familiar with the motion studies of photographer Eadweard Muybridge. In 1872, railroad industrialist Leland Stanford hired Muybridge to settle a bet about whether all four of a horse’s hooves left the ground while it was trotting. When Muybridge embarked upon his task, the exposure times required to record an image were so long that motion was either appeared as a blur or did not register at all. After experimenting with shutter speeds, Muybridge managed to capture the exact positions of a trotting horse’s legs, proving that all of its hooves were indeed in the air at one point in its gait. By 1878, he was able to photograph the complete range of motion of both a trot and a gallop.

Thirty years later, photographs of horses in motion no longer posed an impossible challenge. They appeared frequently in newspapers that covered races like the Grand Prix, where they were surely seen by at least some of the people caricatured in Sem au Bois. Muybridge’s groundbreaking work still had currency during the Belle Époque, however. In 1903, Le Sport Universel Illustré, one of the newspapers that reported on horseracing, ran illustrations that reproduced Muybridge’s series of galloping and trotting horses. For the precision he needed in his scroll, it is likely that Roubille studied Muybridge’s series.

Amidst the throng of horse-drawn carriages in Sem au Bois, there are a few early automobiles. The automobile industry flourished in France after about 1891, and the country boasted the greatest number of car manufacturers in the world by the end of the century.[4]

But automobiles were still remarkably expensive, and there are far fewer cars than horse-dawn carriages in Sem au Bois. This most elite of vehicles is reserved for the kings, princes and dukes

depicted in the scroll while even the aristocracy relies on literal horse power. The balance between cars and horses continued to shift rapidly in the years after the scroll was published, however, and the number of cars driven to the annual races at Deauville greatly outnumbered the number of carriages by 1909.[5]

The scroll format itself allowed Sem and Roubille to incorporate a much slower form of motion into viewers’ interactions with the work. At a total of thirty feet, the scroll is far too long to be viewed all at once. Only one or two cars or carriages could be unrolled at a time. To view the entire length of the work, the individual holding the scroll would have to continually take up the imprinted paper by winding the scroll from the left. This motion would cause the images to process slowly under his gaze, allowing viewers to reproduce the experience of attending the pre-race parade.

Sem and Roubille literally enlarged and expanded upon the idea of moving pictures in 1909, when they collaborated on a circular, forty-foot diorama based on the same theme as Sem au Bois. This diorama, called La Grande Semaine, featured many of the figures who appear in the scroll, though they have generally exited their carriages to stroll on foot along the Bois. As with Sem au Bois, Sem drew the main caricatures while Roubille created supplementary figures, cars and horses. The artists created a sense of depth by building several layers of small cutouts in front of a painted backdrop. The diorama rotated around visitors to the gallery where it was installed, creating the impression that the demi-monde of Paris was processing from right to left. Thus, while the caricaturists were looking to new technologies like photography, they put these influences to use in a form that was already considered outdated. In an article about the diorama, L’Illustration noted that Sem and Roubille had made “a forgotten genre, which has its charm, fashionable again.”[6] By building a diorama in the age of the cinema, Sem extended his caricature of French society beyond his incisive style to the dioramic form itself. While they were powerful and stylish for the moment, the central figures of Parisian popular culture were doomed to become as passé as a diorama in the age of cinema.