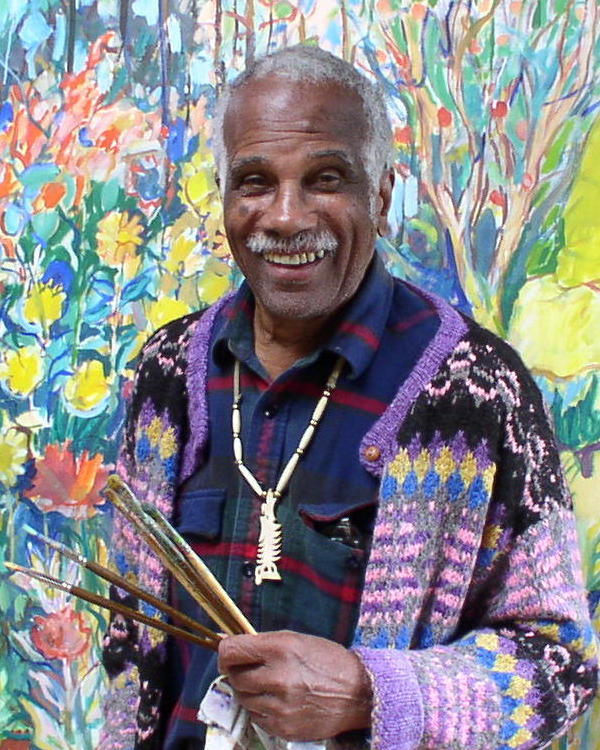 Ashley Bryan  was born in New York City and grew up in the Bronx. He studied at Cooper Union Art School. Drafted out of art school into the US army at age nineteen, Bryan was a stevedore in a segregated Army unit during the Battle of Normandy. He and other African-American soldiers in his unit were responsible for bringing supplies onto the beaches. He kept a sketchbook in his gas mask and drew when he could. "It kept me connected to my humanity," he says.

After the war, Ashley completed his Cooper Union degree, studied philosophy and literature at Columbia University on the GI Bill, and then went to Europe on a Fulbright scholarship, seeking to understand why humans choose war. In 1950, renowned cellist Pablo Casals agreed to break the vow of silence he had taken after Franco came to power in his native Spain. Ashley was permitted to draw Casals and his fellow musicians during rehearsals in Prades, France, where Casals was in exile. Through the power of Casals’ music sessions, something 'broke free' for Ashley: “I found the rhythm in my hand.”

Bryan had taught art for many years, and served as professor emeritus of art and visual studies at Dartmouth College in New Hampshire. Bryan had received praise for his illustrated retellings of African and West African folktales and as a compiler of African American poems and spirituals that help children explore Black culture and history. Bryan's retellings of folktales are noted for their emphasis on the tales' place in the oral tradition and his retention of their 'read aloud' quality and word play. His illustrations added to the tales' appeal for readers with their detail and vitality. Ashley Bryan’s award-winning works include Walk Together Children, an ALA Notable Book in 1974 and Beautiful Blackbird, Coretta Scott King Book Award Winner in 2004. In addition, Bryan had received one other Coretta Scott King Book Award, plus six honors. He had also received the 1990 Arbuthnot Award, the 1993 Lee Bennett Hopkins Poetry Award, the 2006 Hans Christian Andersen United States Nomination for illustration, the Silver Medallion for Contributions to Children’s Literature, the Virginia Hamilton Literary Award, and the 2009 Laura Ingalls Wilder Award. In January 2017, he received a Newbery Honor, the Coretta Scott King (Illustrator) Book Award, and the Coretta Scott King (Author) Book Award for Freedom Over Me: Eleven Slaves, Their Lives and Dreams Brought to Life by Ashley Bryan, which he both wrote and illustrated.

As of the publication of this exhibit, Ashley Bryan continues to work and live on Little Cranberry Island off the coast of Maine.

Ashley Bryan Wilder Award press release from the ALA