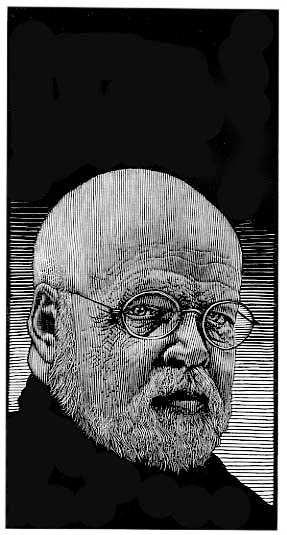 Barry Moser was born in Chattanooga, Tennessee. As he grew up he rebelled against the strictures of his southern, male-oriented family and their notion that art was not a man's job. He attended military school from seventh through twelfth grade, where he learned discipline and orderliness, but also developed a distrust for authority of any kind. In a letter his brother wrote to him shortly before his brother died, he said that as a kid, all Moser did was sit around drawing pictures and reading books while his brother cut the grass, cleaned out the gutters, and painted the trim on the house. Moser responded, "Well, he was wrong. I did not read." Reading was painful for him and he avoided it. Moser went on to become an illustrator, a printer, painter, engraver, printmaker, designer, author, essayist, lecturer, publisher, and teacher. He has received a number of honors and awards for his countless publications and work including the International Board of Books for Young People in 1991 for Little Trickster the Squirrel Meets Big Double the Bear, ALA Notable Book designation in 1995 for Whistling Dixie, and Pick of the List Selection, American Booksellers Association Award in 1995 for What You Know First.

An essay by the artist

A one hour video of a workshop with the artist