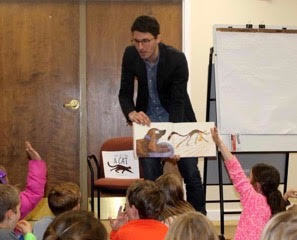 They All Saw A Cat
Brendan Wenzel, author and illustrator
Chronicle Books, 2016
https://brendanwenzel.info/

Brendan Wenzel, an author and illustrator has a great affection for art and animals. With both of his parents being artists, he grew up drawing and having an interest in making books. In 2003, Wenzel graduated from Pratt institute. His work has appeared internationally in magazines and in animations. Wenzel has collaborated with many groups working to protect and conserve wild places and creatures. In 2014, he began his children's book career illustrating Some Bugs and Some Pets by Angela DiTerizzi. His first project as both author and illustrator, They All Saw A Cat, released in 2016 was a 2017 Caldecott Honor Book. At the time of this writing, he and his wife, Magdalena, reside in New York.