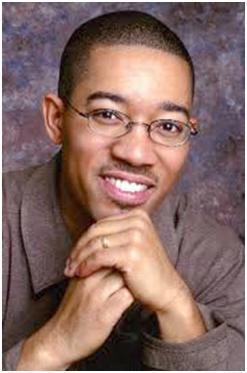 Brian Pinkney was born in Boston in 1961; his father, Jerry, an illustrator and his mother, Gloria Jean, an author, milliner, and silversmith. In 1983 he earned his BFA from the Philadelphia College of Art. Pinkney is the illustrator of several highly-praised picture books including The Faithful Friend, In the Time of the Drums, and Duke Ellington. He also holds an MA in illustration from the School of Visual Arts in New York City. Pinkney has won numerous awards including two Caldecott Honors (The Faithful Friend, 1996; Duke Ellington, 1999), four Coretta Scott King Honors (Sukey and the Mermaid, 1993, Alvin Ailey, 1993, The Faithful Friend, 1996, and Duke Ellington, 1999), and a Coretta Scott King Award (In The Time of the Drums, 2000), and the Boston Globe/Horn Book Award.

A video of the artist working, from The New York Times Books

An interview by and with the artist and their partner/collaborator, from Publishers Weekly