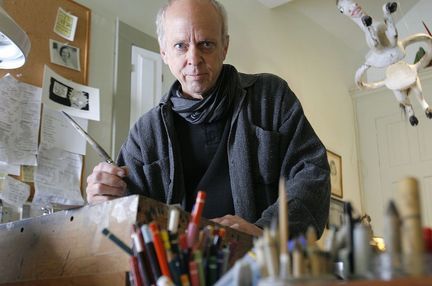 David Small was born and raised in Detroit. In school he became known as "the kid who could draw good," but David never considered a career in art because it was so easy for him. During his studies, he switched his major to Art and never looked back. After getting his MFA at the Yale Graduate School of Art, Small taught art for many years on the college level, ran a film series, and made satirical sketches for campus newspapers.

As of this writing, David Small resides with his wife Sarah Stewart on thier farm in Michigan.

Recognition for David Small's books include the Caldecott Medal So You Want To Be President? (2001), the Caldecott Honor The Gardener (1998); One Cool Friend (2012), National Book Award Finalist Stitches (2009) and The Underneath (2008), the Christopher Award for That Book Woman (2009) and The Gardener (1997), ABBY Award Honor Book The Gardener and The Library (1995), The New York Times Outstanding Book of the Year (The Library), and a Featured Selection for more than ten years on Reading Rainbow (Imogene's Antlers [1985]).

-Something About the Author

The artist speaking about their work at the Kalamazoo Public Library

A conversation with the artist during the COVID outbreak