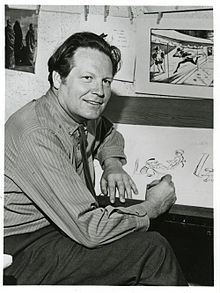 Don Freeman was born in San Diego, California. At a young age, he and his brother were placed with a guardian along with another boy, and he lived for weekends when his father came to visit. Although he intended to go to New York after graduating from high school, his grandmother arranged for him to go to a summer class at San Diego School for Fine Arts. In 1929, he finally moved to New York and worked as a jazz trumpeter. He married his wife, Lydia in 1931. Freeman worked as a freelance artist and a graphic artist for the New York Times and New York Herald Tribune before beginning to illustrate books in the 1940s. In 1951, Don and Lydia Freeman published their first book for children, Chuggy and the Blue Caboose, and in 1953 they published Pet of the Met. Don Freeman wrote and illustrated many picture books that won critical appraise, including a Caldecott Honor citation for Fly High, Fly Low in 1958. He is perhaps best remembered for Corduroy.

A video about the exhibit of the artists book, Corduroy

Transcript of a 1965 interview with the artist, from The Smithsonian