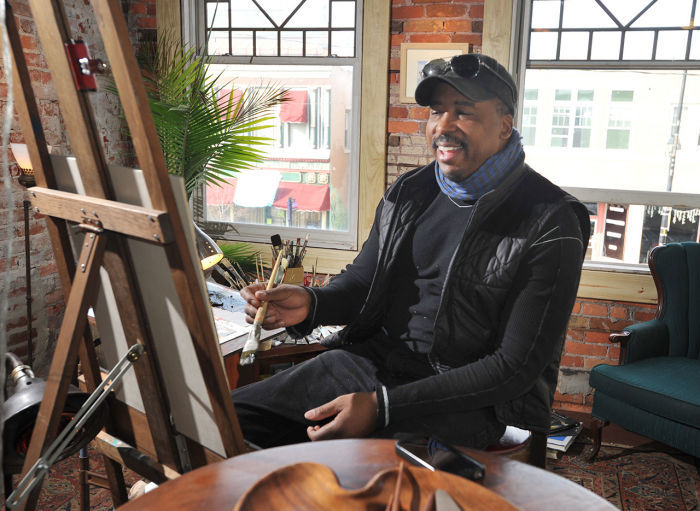 B. Lewis was born in Philadelphia, Pennsylvania into a family of artists. He had undiagnosed reading difficulties in school and came off as the class clown. After finishing the sixth grade, he attended the Saturday morning Temple University School Art League. He remained in the program until his enrollment in the Temple University Tyler School of Art in 1975. During his years at Temple, Lewis majored in Graphic Design, Illustration, and Art Education. There he discovered his medium of preference, watercolor.

After graduation in 1979, Lewis began teaching, along with freelancing in graphic design. Between 1985 and 1986, he completed a body of work which was exhibited in a downtown Philadelphia gallery. The show sold out and bought him public recognition and critical acclaim. Lewis's work is now part of major private collections and is displayed in galleries throughout the United States.

His first children's book illustration was for Jane Kurtz's Fire on the Mountain in 1993. Since then he has illustrated numerous children's books. Honors include the 2003 Coretta Scott King Illustrator Award for Nikki Grimes' Talkin' About Bessie:The Story of Aviator Elizabeth Colemen and the 2005 Caldecott Honor for Jacqueline Woodson's Coming on Home Soon.

An interview transcript from Reading Rockets

A video of the artist discussing their career and life, from The Noyes Museum

The artist demonstrates some technique