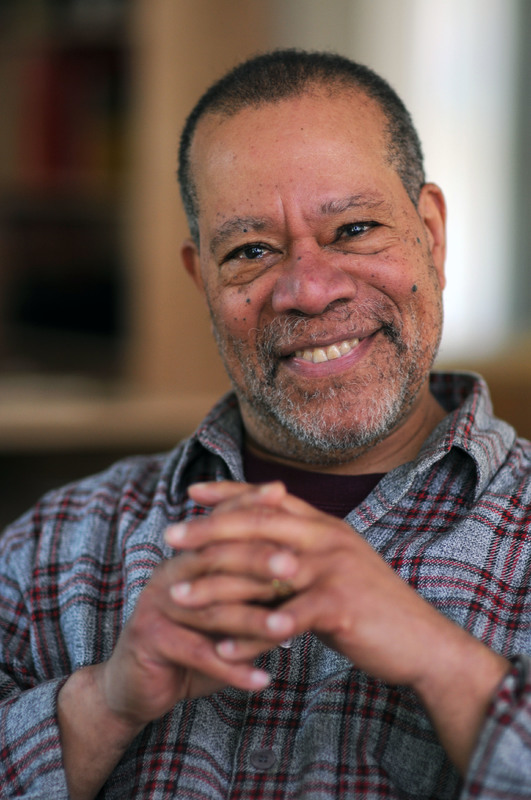 Jerry Pinkney was born in Philadelphia. As early as the first grade, he was known as the class artist and his parents and teachers recognized his talents. After graduating from Dobbins Vocational School in Commercial Art where he met his wife, author Gloria Jean, he attend the Philadelphia Museum College of Art.

Pinkney had worked as a card designer and soon became a freelance illustrator with a studio in New York. He designed twelve U.S. postage stamps and served as part of the NASA artistic team. He and Gloria later moved to Boston and raised four children. They exposed their children to a wide variety of visual, musical, and performing arts. His sons Brian and Myles Pinkney are both illustrators, known for using scratchboard techniques and photography respectively.

Pinkney has had a long and distinguished career as both an illustrator and author of children's books, re-interpreting folk tales and fables. In 2016, Pinkney was awarded the Coretta Scott King-Virgina Hamilton Lifetime Achievement Award.

"In selecting Jerry Pinkney, the Jury observes that his illustrations detail a world that resonates with readers long after the pages of a book have been turned. His five decades of work offer compelling artistic insights into the legacy of African American storytelling and experience. Beyond Pinkney's technical brilliance, his support of differentiated learning through art and of young illustrators sets him apart as both artist and educator. His powerful illustrations have redefined the scope of the sophisticated picture book and its use with multiple levels of learners," stated Awards Jury Chair Dr. Darwin L. Henderson at the ALA presentation.

Pinkney has also been an art instructor at the University of Delaware and State University of New York at Buffalo, in addition to serving as a mentor to many current illustrators. In 1964, he began his children's book illustration career. His awards include a Caldecott Medal, five Caldecott Honors, five New York Times Best Illustrated Books, five Coretta Scott King Awards, four Coretta Scott King Honors Awards, and numerous other awards.

Reading Rockets interview and profile of the artist

The artist discussing his process for "The Lion and the Mouse"