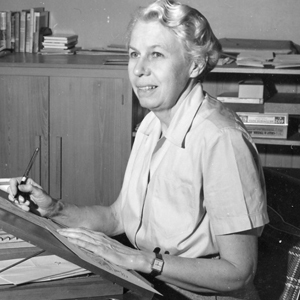 Lois Lenski was born in Springfield, Ohio and had an early interest and talent in drawing. She attended Ohio State University, graduating in 1915 with a B.S. in education and a teaching certificate. Her minor was in fine arts, with her coursework concentrating on drawing and lettering. After graduating from Ohio State, she received a scholarship to the Art Students League in New York, where she studied until 1920. During this time she also studied illustration at the Industrial School of Art in New York. In 1920 she traveled to London, studying at the Westminster School of Art during 1920 and 1921. She then spent several months traveling in Italy.

Her first publication was a coloring book called A Children's Frieze Book: To-Put-Together for Home Decoration (1918). In addition to illustrating her own books, Lenski also provided illustrations for texts by other authors, including the first edition of The Little Engine that Could (1930), and the first four volumes of Maud Hart Lovelace's Betsy-Tacy series (1940-1943). Lenski published ninety-eight books, including several posthumous works. She received the Newbery Honor Book Award in 1937 (Phebe Fairchild: Her Book) and 1942 (Indian Captive: The Story of Mary Jemison), and the Newbery Medal in 1946 (Strawberry Girl).

A shorter biographical video of the artist

A longer biographical video of the artist

An archived exhibit about the artist