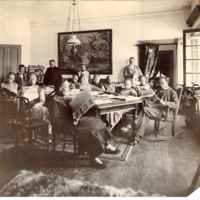 This exhibit explores the story of the origins and development of the Olympic movement in China by looking at the YMCA's introduction and promotion of athleticism there in the late 19th and early 20th centuries. 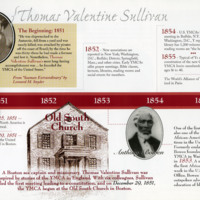 For 150 years, the YMCA has been a pioneering force in the United States—a force so powerful that, as we begin the 21st century, it is arguably the most successful social institution this country has ever known. Above all, the YMCA movement is about people—all ages, races, religions and incomes. Forever mission-driven, Ys exist to mold the kind of people who care about each other, who are firm in their own sense of worth and that of others, who try to foster understanding and respect, who take responsibility for their own lives and help improve the lives of others. 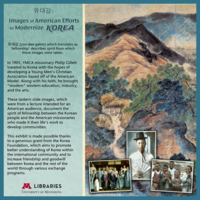 This exhibit features lantern slides from the early 20th century, which documented interactions between the Korean people and the American missionaries who made it their life’s work to develop communities.

The exhibit is sponsored by the University of Minnesota Libraries and the Korea Foundation in collaboration with Hennepin County Library - Minneapolis Central Library. The exhibit was open July 1 - August 15, 2016. An opening reception was held July 7, 2016.