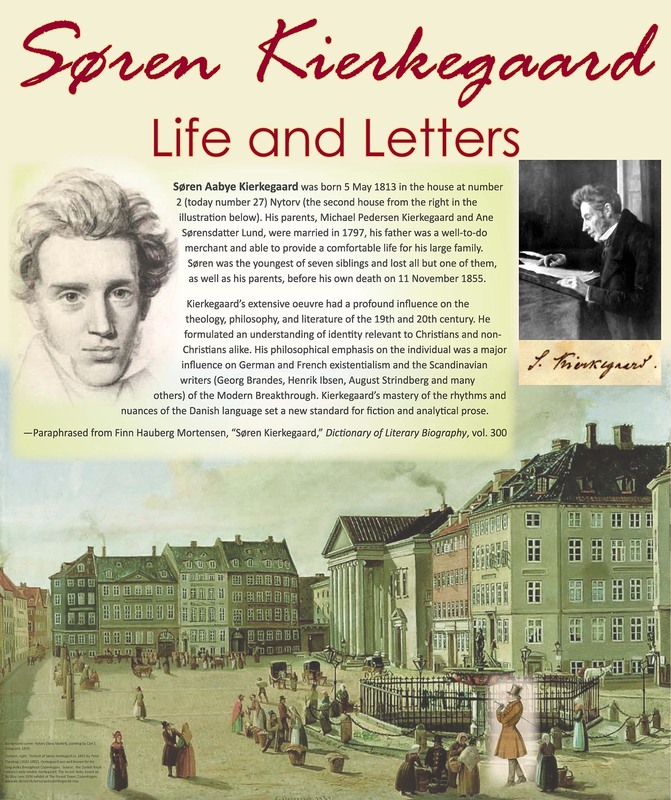 Søren Aabye Kierkegaard was born 5 May 1813 in the house at number 2 (today number 27) Nytorv (the second house from the right in the illustration below). His parents, Michael Pedersen Kierkegaard and Ane Sørensdatter Lund, were married in 1797, his father was a well-to-do merchant and able to provide a comfortable life for his large family. Søren was the youngest of seven siblings and lost all but one of them, as well as his parents, before his own death on 11 November 1855.

Kierkegaard’s extensive oeuvre had a profound influence on the theology, philosophy, and literature of the 19th and 20th century. He formulated an understanding of identity relevant to Christians and non-Christians alike. His philosophical emphasis on the individual was a major influence on German and French existentialism and the Scandinavian writers (Georg Brandes, Henrik Ibsen, August Strindberg and many others) of the Modern Breakthrough. Kierkegaard’s mastery of the rhythms and nuances of the Danish language set a new standard for fiction and analytical prose. 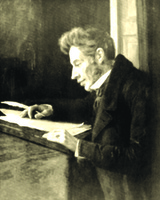 2. Cartoon: Portrait of Søren Kierkegard ca. 1845 by Peter Klæstrup (1820-1882). Kierkegaard was well known for his long walks throughout Copenhagen. Source: the Danish Royal Library’s web exhibit, Kierkegaard. The Secret Note, based on its May-June 1996 exhibit at The Round Tower, Copenhagen. www.kb.dk/en/nb/tema/webudstillinger