Portolan charts, meant for the serious business of navigating safely at sea, were often made with such artistry that they are works of art as well as tools for navigation. Yes, these maps are usually colorful, fascinating and quite wonderful to look at! An examination of three portolan charts in the James Ford Bell Library dating prior to 1500 will illustrate some similarities among them and will raise some questions about these fascinating and rare maps.

All three portolan charts show islands in the west, suggesting that Europeans had begun voyages to such islands or at least had incorporated these real or imaginary islands in their thinking about western voyages. The portrayal of islands in the Atlantic is the reason why they were acquired by the James Ford Bell Library. The portolan charts may be visited in reverse chronological order, because of these western islands. This reverse chronology also serves as a reminder that the "newest" maps are not always the most accurate and important. 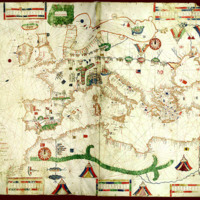 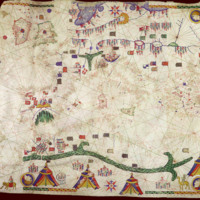 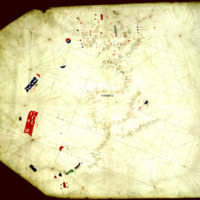 ← Technology, the New Research Tool
1424 Nautical Chart →
At the Bell